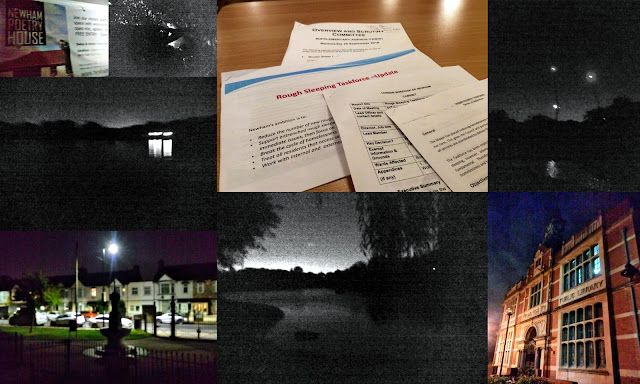 On Wednesday I went to the Newham Council Scrutiny Committee meeting with Homeless officers to present and take questions on where we are with the Rough Sleeping Task Force. We have over 120 people and organisations involved in the Task Force and its various work steams. A progress report will be sent to the next Cabinet meeting next month. Nothing is being ruled out or in except doing nothing is not an option and anything we do will be rooted in care and compassion.

The next day on Thursday evening just after 11pm, I went to Newham Dockside Building to take part in the bi monthly rough sleeper count. This is the 4th one I have taken part.

There was over 30 volunteers from a very wide range of organisations including my colleagues, Cllr John Whitworth and Cllr Shaban Mohammed. We were split up into 10 teams and from midnight to 3am we all drove and walked around Newham to count how many people were sleeping rough that night.

In my team I was a driver with 2 colleagues from the charity, Thames Reach. We were tasked with visiting all of Newham Council run parks to count any rough sleepers. We visited and walked around all our parks and did not find anyone that night. This does not mean that we did not miss anyone, since it was brought home to me that night just how many parks we have in Newham. My phone Sat Nav calculated that we walked that night for about 5 miles.

We did find an encampment with 5 rough sleepers hidden away in woodland alongside a busy dual carriageway. It took us over 10 minutes to walk through woods and bushes to find them. I remembered it from my first count in February. We did speak to some of them to find out what they need. They were quite friendly and forthcoming and said what they really wanted was help to find jobs in the locality.

It was agreed that a Thames Reach worker will come and see them and find out what can be done to help them.

I got back to Newham Dockside at about 3.20am booked out and went home. I had a 10am budget meeting the next morning.

The results of the count will be out soon. While I was pleased that we found no-one in our parks I am still shocked and horrified when I come across people living in such dreadful conditions. We need to do whatever we can to solve this modern day scourge.