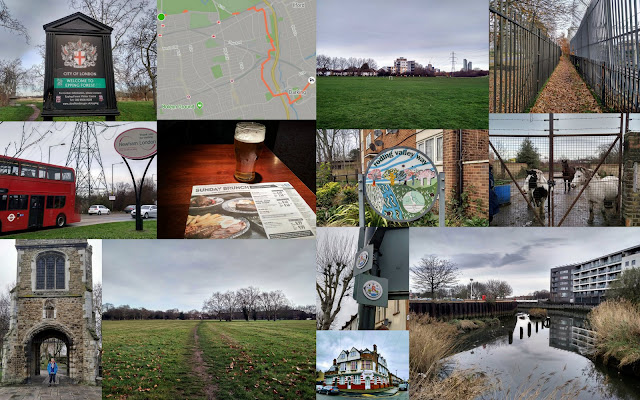 I can't believe that it was 8 years ago that Gill and I went for a 3 hour walk along the River Roding way (North) from Wanstead to Roding Valley underground station.

For whatever last minute whim reason, we decided today to go from Newham along the Roding River (South) towards Barking. There is a vague (and largely inaccurate) map online here

We walked through Wanstead Flats and alongside the City of London cemetery (and overhead train track to Ilford) to join the Roding War path in Little Ilford. There are signs pointing out the path but they are somewhat "sporadic".  Cross over Romford Road and make your way along Walton Road (including Susan Lawrence House named after one the first female MPs). You lose the signs at Little Ilford Park but go straight across and you will pick up the trail again.

Just before Barking we lost the signs again but made our way to  Barking town centre and had a late liquid brunch at the Barking Dog ,Wetherspoons. We walked 4.19 miles in 2 hours 19 minutes (including stops and breaks). Will finish off Barking to River Thames walk another time soon.

I raised on route a number of reports of fly tipping/litter on "Love Newham" app and will raise member enquiries on footpath signage, right of way blockage, fly tipping, litter and other issues I came across. It will be good to go "walkabout" with local Councillors, Council Officers and residents along this route in the near future.
Posted by John Gray at Sunday, December 16, 2018