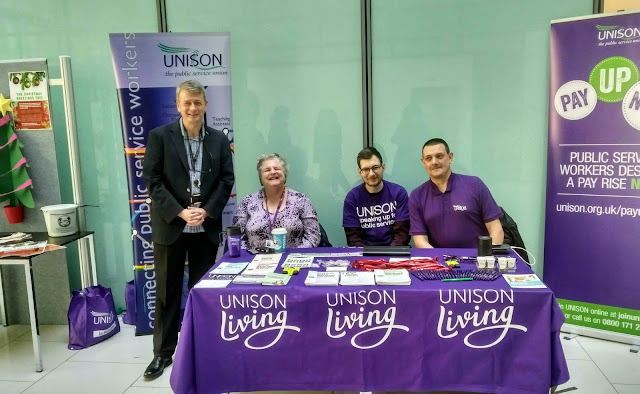 I stopped yesterday at the UNISON stall at Newham Dockside building to chat with colleagues and especially our top UNISON Branch Chair, Kim Silver. UNISON is by far the largest trade union in Newham (and of course the best) and is also now the biggest union in the country with some 1.3 million members.

We discussed the exciting news that after so many years of UNISON campaigning and also thanks to the commitment of our new Mayor, Rokhsana Fiaz, Newham will finally become not only a London Living Wage employer but also sign the UNISON Ethical Care Charter.

Up to 1000 Newham care workers, mostly female and black residents, who are currently suffering poverty pay will have a pay rise of up to £100 per week, proper training and occupational sick pay. All new Newham Council contracts will require a London Living wage. Newham will become a Community Wealth Building Council and campaign for all employers in Newham to stop paying poverty wages.

Kim is Newham Custom House born and bred. As well as being a UNISON branch officer, anti-poverty and disability advocate she is also a local magistrate! She is your genuine grassroots Labour movement activist.

I am so proud to call her my comrade, even though in our new respective roles, we will not always agree and no doubt she will give me a severe ear bashing (or far worse) from time to time.
Posted by John Gray at Friday, December 14, 2018