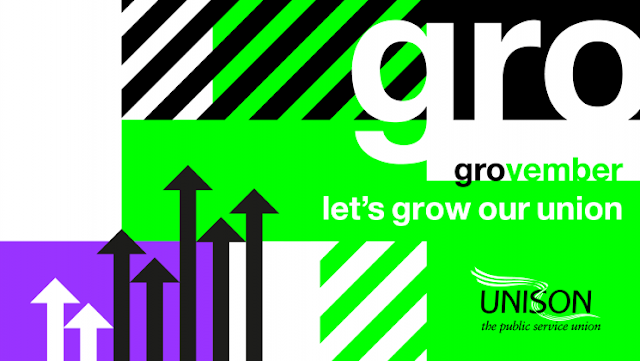 I really enjoyed this UNISON NEC meeting and I thought the debates and discussion was mostly excellent. I had to leave slightly early to go to LAPFF Pension conference but was pleased that we managed to grow as an union and that we should have a fairer NEC election process in January.  We cannot allow people who are not members of UNISON to influence our internal NEC lay led democracy.

In the debate on our Grovember campaign I shared with the NEC a story about successfully recruiting a new UNISON member via a mobile phone (while in a pub - but alcohol did not play a meaningful part in this process - honest).

I will be putting my name forward as a candidate again for the UNISON Community NEC General seat 2019/2020. The nomination process starts next month.

"UNISON’s final NEC meeting of 2018 opened with “good news to end the year on and a great way to start 2019”.
A report on the month-long campaign for growth that the union ran in November – or Grovember as it was dubbed within the union – showed every region and every service group in growth.
Assistant general secretary Liz Snape reported that November was a record recruitment month, with 18,000 people joining the union. And 75% of them joined online in a process that now takes less than three minutes.
At the same time, 12,380 members left, giving a growth of just over 5,700 members in November and put the union firmly on track for “gradual, consistent and sustainable growth” topping 6,000 for the year.
That is an incredible achievement for a union that has been up against it for a decade, the NEC heard.
It dispels the myth that unions aren’t popular and that young people won’t join – with young members featuring strongly among our new recruits.
Going into next year, the union will also set up a project looking specifically at retaining members so the union doesn’t just grow through increased recruitment but also through better retention.
General secretary Dave Prentis acknowledged the hard work of branches and staff in delivering this. “It’s a great result – I can’t thank the people involved enough. This shows what our union can do when we all work together.”
In his report to the NEC, Mr Prentis said the union had to continue to challenge the government’s narrative that austerity is over. “It is not,” he said. “It is a wrecking ball that continues to ruin our members’ lives.”
And he paid tribute to UNISON branches who were fighting and winning disputes through industrial action across the UK.
The NEC also:
Hat tip UNISON
Posted by John Gray at Monday, December 17, 2018