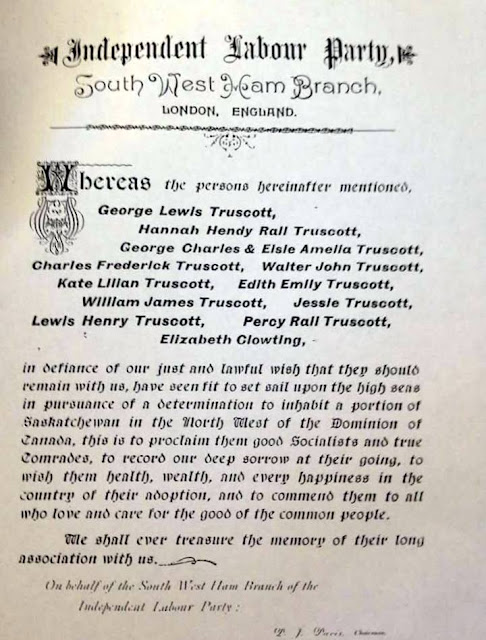 A few weeks ago this very charming "farewell" was published on "West Ham Labour" Facebook page by William Truscott, who is the Canadian Great Grandson of George & Hannah Truscott.

Modern day William Truscott described how his great grandfather had signed the nomination papers of the first ever Labour MP, Keir Hardie (elected 4 July 1892 for South West Ham) and placed his four sons at the four corners of the stage that Keir was speaking, armed with barrel staves to protect him.

The Independent Labour Party was formed by Keir Hardie in 1893 and eventually become part of the Labour Party.

A quick google search revealed that the family (including 11 children) left West Ham in 1903 to become farmers in what is now known as the "Barr Colony" in Western Canada.

I offered to show William around the Old Town Hall in Stratford where Keir Hardie was actually elected the next time he comes to visit the UK. He has accepted.
Posted by John Gray at Sunday, December 30, 2018