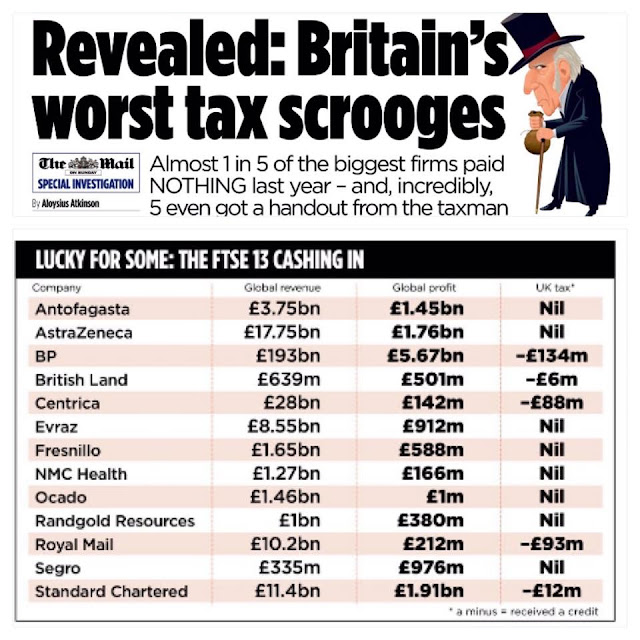 “Almost one in five of Britain's biggest companies paid not a penny of corporation tax in the UK last year, it can be revealed.

The Mail on Sunday has managed to obtain the details of the tax paid by 69 of the FTSE 100 group of largest companies on the stock market – many of which do not publish these figures in their annual reports.

The remaining 31 refused or failed to respond to repeated requests to disclose their tax payments.

Where details could be obtained, 13 firms – equivalent to one in five of the 69 that came clean – either paid no corporation tax in Britain or received a tax credit from HM Revenue & Customs.

Some firms are even paying their chief executives more than they pay in tax. Royal Mail boss Rico Back stands to earn £1.4million this year on top of a £5.8million 'golden hello' for joining the company.”

This is a common theme amongst big business, for example:

“Netflix received a €199,000 (£174,000) tax rebate from the UK government last year and paid no corporation tax, despite making £500m in revenue from British subscribers to the streaming service.”

“Cadbury owner Mondelez International paid absolutely no corporation tax to the UK taxman in 2017 despite making profits of £185m. The tax bill should have come to £35m.”

That’s before you get to the likes of Amazon, Facebook, Google and Apple, who have effective tax rates of less than 1%.

Analysis has shown that £110 billion of tax giveaways will have been handed to corporations by the end of this Parliament.

“It’s not a story of individual villains, of bad people, that if we simply replaced them with good people then all the problems with our society would be solved. The problem is to do with a system and the behaviour that it not only encourages, but depends on ... Ernest & Young, this is what they do. Along with other large accountancy firms, they facilitate tax avoidance on an industrial scale...”

Our system is purposefully designed to facilitate such behaviour and is protected by complicit tax dodging politicians. Take a look: