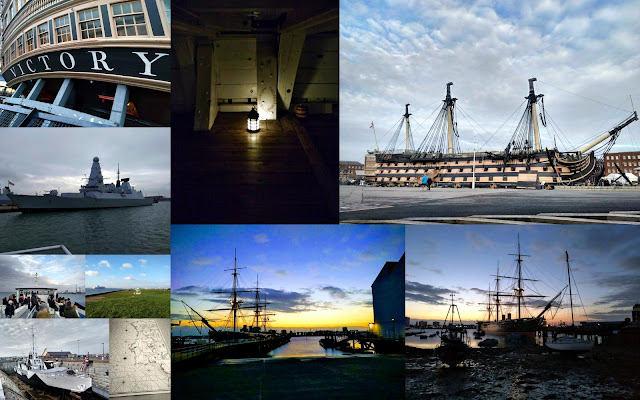 Off message but last month as a birthday treat I went with Gill for a weekend in Portsmouth to visit once again its Historic Navy Dockside. It is well worth a visit if anyone is interested or curious about our naval history.

Many years ago I read all the fictional novels by Patrick O'Brian on the Royal Navy in the Napoleonic wars, so it is always a treat to visit HMS Victory (top of collage) which fought in the decisive Battle of Trafalgar in 1805. Battleships at the time were floating gun platforms and needed a huge crew to fight the guns. By visiting the ship you can see for yourself the crowded, wet and dangerous living conditions of 850 sailors on board. It must have been dreadful with the pain dulled by the daily half pint ration of strong rum (or 8 pints of beer in home waters).

You can buy a ticket that gives you (nearly) unlimited access to the dockyard for a year. As well as HMS Victory, there is the Victorian Battleship HMS Warrior (see spectacular sunset photos bottom centre and right of collage) and the First World War Gun ship M33 (which fought in Gallippi). You also have access to the National Royal Navy museum, Royal Navy Submarine Museum, the Explosion Museum of Naval Firepower as well as a number of other attractions aimed at children and families.

Unfortunately the Tudor Battleship "The Mary Rose" is no longer part of the "all in deal" and you will have to pay extra to visit.

One highlight included is a free 45 minute boating tour around the Port of Portsmouth during which you can see modern day Royal Naval Warships. The new Aircraft carrier HMS Queen Elizabeth was not in port but the modern Destroyer, HMS Diamond D34 was in the docks (see picture left of college).

When HMS Victory was built in 1762 it cost £63,176 and 3 shillings,[the equivalent of £7.92 million today). HMS Diamond alone cost the UK around £1 billion.  I have to say that I tried to work out how many homeless and overcrowded families we could house in Newham with £1 billion.

Portsmouth is lovely with plenty of things to do if you or your partner are not historically minded included a number of good value restaurants in Southsea.
Posted by John Gray at Saturday, December 08, 2018