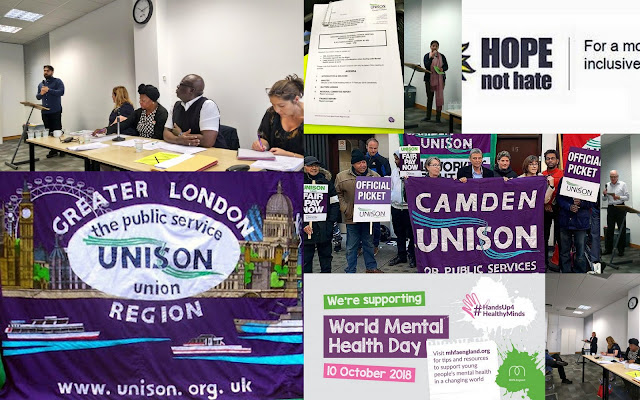 I was little late turning up to the Greater London UNISON Regional Council on Thursday, so missed the guest speakers from Camden UNISON on their dispute with Parking Contractors NSL on poverty pay (see UNISON General Secretary, Dave Prentis, on their picket line).

However, I did hear a speaker from Hope Not Hate give a thought provoking and deeply disturbing analysis of the rise of a new poplar far right front and neo-Nazi terrorism in the UK (and beyond).

On the one hand membership of British Nazi and Fascist parties such as the BNP has collapsed but we are now seeing the largest numbers of people in decades on the streets supporting campaigns led by new far right groups.

The thug and serial convicted criminal ,Tommy Robertson, has a huge social media presence, far in excess of any anti-fascist group.

The speaker correctly pointed out that we cannot fight modern day fascism with the tactics of the 1980s and simply screaming "NAZI" at people attending marches since they are genuinely angry at the Manchester bombing, is not going to do anything positive.

We have to work out how to defeat this new social network of individuals, who do not belong to traditional far right political parties but are being radicalised by Nazi websites, here and abroad.

Going on anti Nazi demos and protests are tactics and not a means to an end. We need to get a better and more effective modern message to counter this threat.

Final speaker was Ann-Marie Christie from Thompsons solicitors, who since this was World Mental Health day, gave a  practical update on possible employment law and personal injury measures that union reps could use to protect members at work.