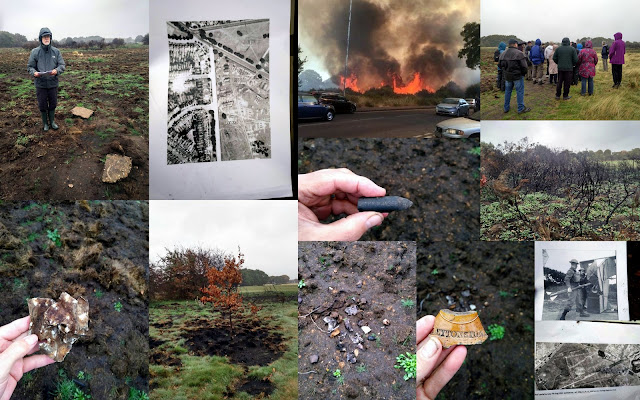 This afternoon Gill and I went on a walk organised by the local conservation and wildlife group called WREN in the "flats" (ancient heath land, part of Epping Forest, now owned and managed by the City of London) right next door to where we live.

In July this year there was a huge grass fire on the flats, which at its peak flames were 30 foot high and jumped across local roads, which took 40 London Fire Brigade (LFB) fire engines to bring under control and put out. It was the largest grass fire the LFB has tackled since it was formed in 1965.

Luckily no one was seriously hurt and there was little damage to property but interestingly the City of London were asked by the LFB to bring in a special "plough" to turn over the burnt areas of grassland so the area could be saturated with water in order to prevent "hot spots" reignating. An unintended consequence of using this "plough" was that the ploughing turned up historic remains from the past that had been buried for at least 70 years.

The purpose of the walk was to examine these remains as well as see the damage done by the fire to birds and plants in the flats, part of which has been designated as a Site of Special Scientific Interest (SSSI).

About 20 local residents turned up for the walk despite being rather damp and overcast with the forecast of possible heavy rain or thunder.

The walk leaders were Peter Williams and Mark Gorman, supported by other conservation activists.

We firstly walked across the flats to a site of a World War 2 circular radar/telecommunications centre and could see pieces of electoral wiring and numerous pudding shaped pieces of concrete which could have been signal mast supports from the centre. You can still see the the shape of the centre from the air.

We also formed a line to walk across a nearby area where there was a war time anti-aircraft Rocket station looking for historical artifacts. We found pieces of shrapnel (Gill's sharp eyes) in the ground which are thought to have been debris from the rockets fired at German Bombers. It appears that these rocket stations were not successful and despite improving morale by being very noisy and apparently showing Londoners they were being defended from the enemy, they did not result in any of the German bombers being shot down. A similar station in Victoria Park is blamed for firing rockets in a training exercise and causing the panic and stampede that resulted in the Bethnal Green tube disaster in 1943 which killed 173 civilians.

There was also remains shown of a probably 19th century ginger beer bottle with "Leytonstone" marked on it and a German bullet found locally with a made in "Nuremberg" stamp and reference number.

Next we visited the concrete foundations of world war barracks and storage facilities from the rocket site hidden away in Long wood.

The walk finished across Centre Road at the site of the German military Prison of War camp adjacent to Lakehouse Road. This was a holding prison for high risk Germans, suspected of being die hard Nazis.  A local fireman in his autobiography noted that following a VI explosion in nearby Lakehouse which destroyed homes and killed civilians, some prisoners were giving Nazi salutes and shouting "Sieg Heil" in celebration of the V1 attack.

My paternal Grandfather, another John Gray, was in an anti-aircraft regiment during the second world war and may even have been stationed locally. I must find out more.

At the end of the walk the plans currently being discussed to allow large music festivals on the flats and the possible (likely) negative impact on rare nesting birds were brought up. I hope that the City of London will "think again" about these proposals and reject them.

Many, many thanks to the organisers of this event.
Posted by John Gray at Sunday, October 14, 2018