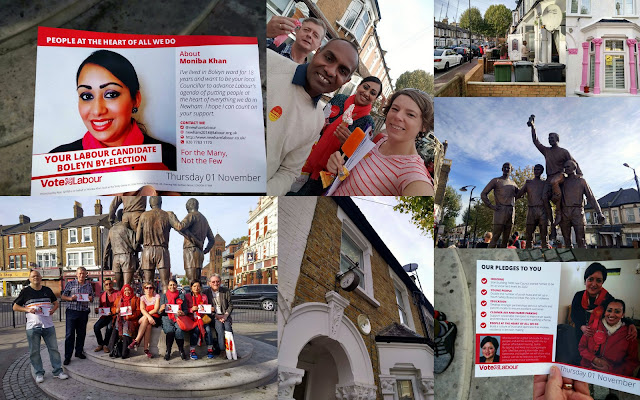 Pictures from Saturdays afternoon canvass in Boleyn ward, East Ham. Meeting point is the 1966 World Cup Champions statute. There were 2 canvass teams, one with the Mayor, Rokhsana Fiaz and the other with the candidate, Moniba Khan, which I was sent on.

Moniba is probably the nicest political candidate I have ever met or canvassed for - ever!

She is 100% genuine, with no side about her whatsoever. What you see is what you get. She genuinely enjoys meeting people and talking to them. She gives elderly people she has never met hugs and kisses. She listens to people and if she does not know an answer she admits it and says she will go away and find out.

She has lived in the ward for many years, has 2 young boys who go to local schools and when she promises she will try and do things for local residents, you know she will do her absolute damndest to do so.

"Shock, horror" - she even said really nice things about her Tory opponent that we met during the canvass! As an old school election agent I tried to persuade her otherwise but she was not having any of it. Definitely a new and kinder type of politics.

The canvass went very well. I had some good political discussions, including a not successful one  with an elderly resident who said he was a life long labour voter but hated Jeremy as our leader since he would not in any circumstances as prime minister press the button to launch our nuclear missiles (and kill millions of people)  but he also hated Blair as a complete sell out. We may get from him the local Council vote but...

Boleyn is an interesting and varied ward. I loved the pink house and the terrace house, which had a clock mounted on the wall with an outdoor temperature gauge next to it. I wonder why?

Highlight of the canvass was of course the ice cream & lolly fest (see top middle) brought about by the unseasonably warm and sunny weather. Labour doorstep canvassing can at times be (briefly) as nice as our nicest candidates.