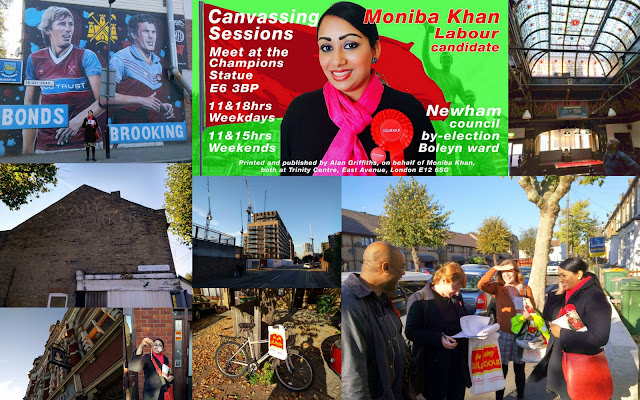 Picture collage from yesterday's campaigning in Boleyn Ward by-election, Newham. There had been 3 teams out in the morning and I joined our truly exceptional candidate, Moniba Khan, for the 3pm session with as it happens, all West Ham CLP comrades.

Two of which were keen Brexiters from very different wings of the party and were doing their duty while the massive demo of pro people's vote marchers took place in Westminster.

In the morning there had also been another successful @bikefromboleyn event supported by Moniba and Newham Mayor, Rokhsana Fiaz.

The canvass itself went very well and was pretty good humoured. Lots of chat and banter with local residents. We discovered a fading advert for the "Daily Worker" on the wall above a old shop front. Was this an advert for the paper (now "Morning Star") or was this once a local headquarters for the Communist Party?

Moniba was our secret weapon to deploy against any anti Labour residents or waverers.

My Newham Cabinet Colleague, Cllr Terry Paul and I had a "difficult" conversation with two local residents on the pavement, who loudly complained about anti social behaviour in the locality. Which we had not really picked up from talking to other residents. Afterwards we asked local residents about ASB in the area and were told in no uncertain terms that the people, who were seen talking to us were actually the biggest cause of ASB!

Afterwards we went to The Boleyn Pub for a gossip and a drink. I had never been there before and was amazed at the glass ceiling in the rear of the pub. Afterwards I tried to go to the Newham Council Shared ownership homes open day in the site of the old Boleyn Football stadium but was too late.

By election is Thursday 1 November.