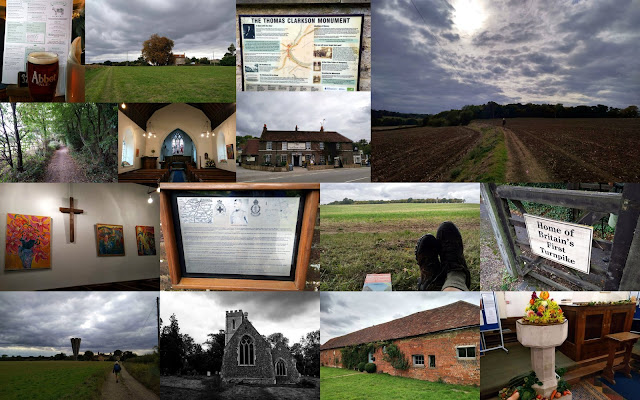 Off message this was a seriously good Sunday walk that Gill & I did late September which is only a short drive from London (apologies to my fellow Newham Cllr Daniel B for using the "D" word). It was the first walk that I had downloaded from the Ramblers website (members only). The site is a bit "hit and miss" to work out but once you master the search engine it comes up with some great walks. It is free to members.

This walk takes you across old rural England. While you start the walk next to the "Robin Hood and Little John" pub (which despite the silly name is a listed 300 year old pub currently closed on Sunday) the first farm you come across was once apparently owned by the medieval Knights Templar. Google "Bengeo Temple Farm" for improbable tales of hidden treasure and secret tunnels.

The 11th century St Catherine's Church is well worth a visit. There had been a harvest festival ceremony that day and two elderly church wardens were still washing up from the post service coffee and cake. They were very friendly and welcoming to their walking visitors. The church was well maintained (not always the case in small rural churches we have come across) and had lovely bright colourful pictures on its walls on loan from a local artist. Before the reformation nearly all churches were painted internally in similar bright colours.

There was an amazing deep long dried out river bed which makes you wonder what on earth had happened to dry it out?

It was really quiet with hardly a soul to be seen with plenty of places to stop and enjoy a picnic. It was still warm enough to enjoy a short snooze.

In High Cross you can visit the grave of Arthur Martin-Leake, who earned two Victoria Crosses in his lifetime. Our highest award for bravery. He was a medic and earned both awards for saving lives on the battlefields in the Boer War and the First World War.

At the village of Wadesmill there were two further historical moments of national significance. Firstly, the first ever "Turnpike" (or toll road) was apparently here and also there is a monument to the anti-slavery campaigner, Thomas Clarkson, who spent his life fighting against slavery in the 18th Century. Apparently the memorial is the actual spot where while passing through the village on coach he suddenly decided as a young man to devote his life to the cause.

On the last leg of the walk there was some wonderful big skies and a mixture of sunshine, cloud and impending dusk. See photos in the collage above. In our wonderful British countryside at this time of year, with good weather (not guaranteed but does happen) you can experience beautiful big Sky vistas as great as anywhere in the world.

This circular walk is 7.3 miles and has only a maximum of 133m of ascent. Afterwards we had a drink in the Feathers pub in Wadesmill. No sign of Jim Royle unfortunately. He was probably at home watching the footie on his own big Sky.
Posted by John Gray at Tuesday, October 23, 2018