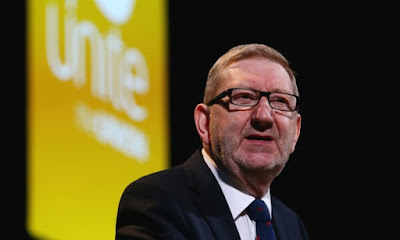 Well said! elected General Secretary of UNITE, Len McCluskey who gave support in advance of the Labour Party NEC meeting on Tuesday, where the issue regarding the IHRA definition will be discussed and hopefully begin to be resolved.

I also agree with Len that some of the anti-labour responses by some Jewish leaders have been seemingly ridiculous and over the top but if  my neighbours had been murdering my Grandparents and turning their skin into lampshades and soap then perhaps I would also react in a similar manner.

I watched this morning a clearly distressed, John McDonnell MP, on the  Andrew Marr show give a sensitive but powerful response to the interview comments by the former Chief Rabbi, Jonathan Sacks.

I agree with John's response that there are profound misunderstandings afoot but also his implicit assurance that this mess will be dealt with and that Labour will (and should in my view) adopt the full IHRA definition and all the examples, as does UNISON, GMB and UNITE.

As a grassroots trade union steward for over 30 years, while I understand the genuine concern about adopting all the "examples" I simply do not accept that this will restrict me or anyone else from calling out the Israeli state for murdering unarmed civilians, building illegal settlements, carrying out collective punishments while being clearly racist towards Palestinians.

Unless we lance this boil and return to our natural moral high ground on all forms of racism we will destroy the Labour movement and also destroy our chances of getting rid of this completely vile Tory Government and electing Jeremy as our Prime minister.
Posted by John Gray at Sunday, September 02, 2018