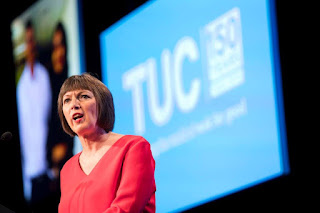 A somewhat random selection based on my tweets from Monday.

Frances O'Grady TUC leader in her speech to Congress calls for a 4 day working week for 21st Century. Just as in 19th century the TUC successfully campaigned 8 hour day & in 20th-century for weekend off & annual leave.

Also, she told Mrs May. "If you won't give us the New Deal that working people demand, then stand down. And take your ‘do nothing’ government with you. Give us a General Election. And we’ll do every thing in our power to elect a Prime Minister who will".

UNISON leader, Dave Prentis, while moving composite 7 "Public Services Outsourcing - Lessons from Carillon calls for an end to privatisation and making demands of Labour too. A day one commitment to abolish the divisive, destructive, disastrous policy of privatisation. No reviews, no reports but an immediate end!

Finished off with evening fringe at Midland hotel on pensions chaired by Henry Tapper. First a short history of pensions then some home truths about the appalling miss-selling of unsuitable investments to British Steel pension holders. Surely this fraud this must be a criminal offence?

While fascinating presentation on new pension scheme for Royal mail workers based on dutch and Canadian models.

UNISON delegates had their delegation social later.  A good time was had by all.
Posted by John Gray at Tuesday, September 11, 2018