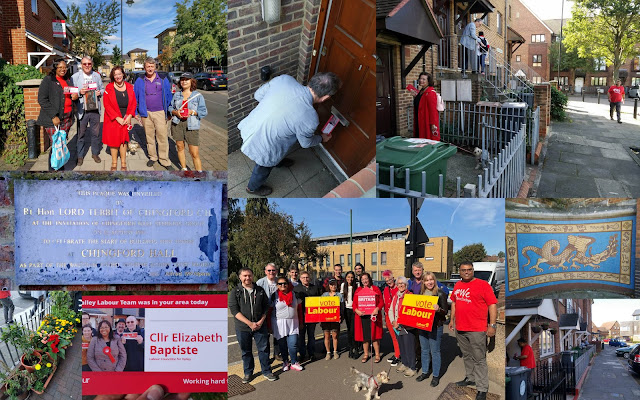 West Ham CLP came over today to their nearby sister constituency of Chingford and Woodford Green to support Labour candidate, Faiza Shaheen, who is standing against sitting Tory MP, Ian Duncan Smith.

While driving on route I passed the famous Walthamstow Greyhound racing stadium which is now being redeveloped by L&Q Housing (after a huge row) and remembered going to its famous night club, Charlie Chan in the 1990s.

Today was a national campaigning day for Labour activists. We met with local activists led by Faiza and local Labour ward Councillor, Elizabeth Baptiste. Faiza is a UNISON member and was successfully nominated by UNISON London Labour Link to be the Prospective Parliamentary Candidate, while Elizabeth is a former UNISON NEC colleague of mine.

We were split into 3 canvass teams by Faiza. My team was mostly West Hammers led by our MP, Lyn Brown.

We canvassed a former Council estate of 1960s Tower Blocks, which had been knocked down in the 1990s and replaced by low rise housing now owned by Peabody Housing Association.  Residents were generally satisfied with their landlord but concerned with parking, dog mess and fly tips. I could have been campaigning in Newham.

I embarrassed myself and a local resident,when a young women answered the door I knocked upon and who I thought was a child and when I asked to speak to her parents, she said she was the adult in the household. She accepted my apologies and despite me putting my foot into it, she still said she was a Labour voter.

The picture in the top left of college is of all the UNISON members in our team (including a member of my branch who I had not met before) excluding Faiza who was leading another team.

West Ham Labour will be supporting Chingford & Woodford Green Labour in their campaign to elect Faiza as their MP at the next General election. Our residents in West Ham (a safe Labour seat) desperately need a Labour Government to solve the housing crisis, save our NHS and end austerity. Unless we win in marginal seats like Chingford and Woodford Green, we will not be able to do this.