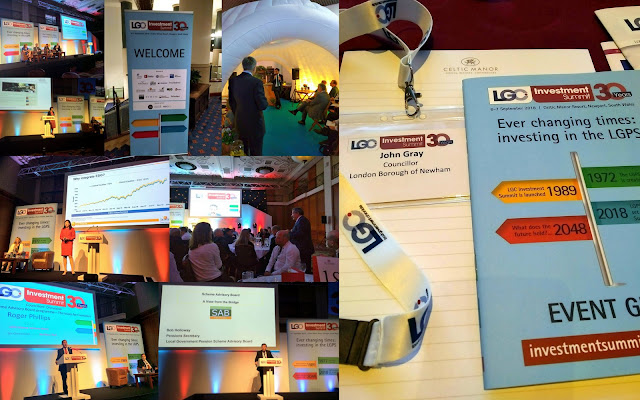 Last week I went to this summit in South Wales on investment in the Local Government Pension Scheme. There was around 250 Councillors and Council pension staff from all over the country.

The opening speaker John Roe from Legal & General gave his perspective on the UK and global economy. He argued that he did not think that the equity market was expensive and made an observation that rising income inequality had led to the rise of fascism and the anger that caused Brexit. I asked him in the Q&A what was the solution and he said greater taxation of the international elites and an open debate on immigration. Not often do I hear calls for greater taxation in such conferences (I agree totally with him on this point)

Next we were invited to visit different briefing sessions. I went to the one on "Fixing our broken housing model". Which turned out to be an introduction to the merits of pension funds investing in purpose built private sector rental but not alas, fixing the complete and utter mess that UK housing is in.

Back in the main hall we heard of research by Hymans Robertson that following the changes in the LGPS in 2014 some scheme members had actually seen their future pension entitlement rise by 24%.  Which is mainly due to rubbish pay in the local government in recent years which has failed to match inflation.

In a focus session on ESG investing there was some compelling evidence from MSCI that good ESG is "material". Good ESG investments tend to have better cash flow, be less risky, result in greater dividends & make it 3 times less likely to suffer serious incidents such as the Volkswagon fraud and BP Deepwater disaster.

At the next focus session, Abbie Llewellyn-Waters, from Jupiter gave evidence that ESG can deliver "Alpha" performance. Also, with regard to the S (social) in "ESG", she was clear that “the better that companies treat their workers, the better the companies financial results.....without a shadow of a doubt”

Roger Phillips, chair of  LGPS National advisory board spoke to a meeting of Councillors only on its annual report. Membership of the LGPS had increased to 5.6 million members, had £263 billion in assets, 1700 different employers and enjoyed in 2017,  a 19.5% increase in investment performance. However funds need improve their data management.

At the session on “Infrastructure, urban regeneration & real estate”, to wake everyone up, I asked the panel who had spoken about the investment opportunities on investing in this asset class about the statement by Sir Howard Davies, Chair of RBS who said on Question time early this year that “PFI was a fraud on the people”.  He had argued it was always cheaper for Governments to borrow money than private organisations to spend on infrastructure. How do you respond to this statement?

The response was that Government does not want such debt on its balance sheet. Which is an argument post 2008 crisis and post quantitative easing that I have not heard for many years.

In the last session of the day with the Pension Regulator & the FRC, I asked both speakers why was it that in private defined benefit schemes, up to 50% of trustees were nominated by beneficiaries but in the LGPS, a public defined benefit scheme, there was no obligation whatsoever to have any beneficiary representation on its boards?  The regulator replied that they did support member nominated representatives in the private schemes because they can challenge "group thing" but they also have pension trustees boards that only have professional trustees on it.

I note that Labour is committed to make 50% member nominated representation compulsory in all pension schemes.

At the summit dinner the guest speaker RH Lord Winston of Hammersmith, who was as entertaining and as "nice" in real life as he appeared on the telly.

In the morning after more presentations on successful partnership working (Pooling) and protecting your equity portfolio from a future crash (which I am sure is coming sometime soon) I went to a briefing session on "Is sustainable investing just a romantic notion?" session with Newton.

Who pointed out that some $300 billion was invested in alternatives to carbon in 2017. They also compared modern day oil reserves with the 19th century slave ships which became "stranded assets" when slavery abolished

Secretary to the National LGPS advisory board, Bob Holloway, reflected on 35 years involved with local government pensions and announced a meeting with the minister for council pensions committee chairs on 15 November 2018.

In the last session on Devolution and Regionalism, Dawn Turner, CEO of the Brunel Pension Partnership talked about not investing infrastructure because the Government tells us to do it but if it fits our needs & purposes. Also, we are not impact investors but should be aware of any positive or negative impacts from our investments. Not just globally, but in the UK as well

Final speaker was Paddy Dowdall, from Greater Manchester Pension Fund about their investing in housing... “Council provides the land and the Pension fund provides the capital” also “by definition residential housing is local & who knows more about local than councils”. For many years they have invested a percentage (5%?) of fund locally and managed to avoid any "moral risk" by making sure that the actual investment decisions are made independently.

Overall, a very informative and useful summit. It has now been running for 30 years but will no doubt have to change in the future when the pools take on investment decisions from local funds even though funds will retain responsibility for liabilities and asset allocation.
Posted by John Gray at Monday, September 10, 2018