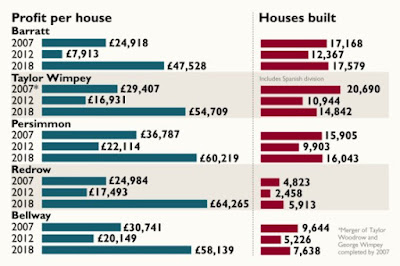 I was a little late and missed items on policy context and improving the private rented sector but was there for - delivering new Council homes, working with with Housing Associations and best practice on community led housing. Chaired by lead GLA housing spokesperson Tom Copley

See below yet another superb article on "Red Brick" about the "Great British Housing Rip Off" by Steve Hilditch.

"Some people suffer because of the housing crisis, others do quite nicely out of it thank you. Land owners are perhaps the best example of those who have traditionally coined it in. Nothing much has changed since Winston Churchill, way back in 1909, called land ‘the mother of all monopolies’, criticising ‘the enrichment which comes to the landlord who happens to own a plot of land on the outskirts of a great city, who watches the busy population around him making the city larger, richer, more convenient, more famous every day, and all the while sits still and does nothing.’ And still they do.

But attention has been drawn more recently to another group of people who have been achieving great riches from the miseries of others – the housebuilders. You might say that at least housebuilders produce something of use, unlike the landowner, and the point is valid. But recently the vast profits being made by the volume housebuilders have been substantially donated by the government, free gratis and for nothing.

The housebuilders’ own special magic money tree is called Help to Buy. In an excellent article in the Times on 8 September, Property Correspondent Tom Knowles showed how the average profit made by housebuilders on each home has doubled since the scheme was launched. Knowles’ analysis showed that ‘the top five builders in Britain are making an average profit of £57,000 on each house they sell, compared with a mean average of about £29,000 in 2007’.

On Red Brick we have criticised Help to Buy from the time it was launched in 2013 because it is a subsidy on the demand side of housing – it enables people to spend more on housing without necessarily increasing supply. A little bit of economics tells us that in the longer term it is likely to be self-defeating because more demand with no more supply will lead to price increases. Far better, we have consistently said, to apply whatever public finance is available to boosting housing supply not demand.

At the launch of Help to Buy the argument was made that the scheme would boost supply by giving developers confidence that they would have buyers for their output – after all, no-one builds what they cannot sell. Yet Knowles confirms that the total number of new houses being delivered is much the same as it was ten years ago. He uses Barratt as evidence: profit per house has doubled since 2007 (he uses that date because it was the last full year before the global crash), but it is building only 411 additional homes. He provides a fascinating chart to illustrate the detail, repeated below.

Knowles quotes analysts who confirm that the largest driver of today's profits is Help to Buy. One assesses that housebuilders would be making £22,000 less profit on each house built for first time buyers if Help to Buy was not in place, and concludes that ‘someone is gaming the system’.

One of my favourite analysts, Neal Hudson, who puts good stuff on Twitter @resi_analyst, is quoted saying that shareholders had become ‘the main priority’ for housebuilders since the financial crash. ‘The over-arching factor has been big pressure from the City,’ he is quoted as saying. ‘The priority for them is profit margin not the number of homes built.’

One housebuilder chief executive was paid £75 million in a bonus last year, putting even bankers to shame. I suppose you could argue that no-one would turn down a nice earner, even if it is on the back of a government scheme designed to tackle the housing crisis. And, of course, it is government policy that is to blame. Since 2010 housing finance policy has been turned on its head. Instead of providing grant to enable genuinely affordable homes for those on low and medium incomes, Government help is now aimed at supporting the private housing market – and not very successfully it seems. The Chartered Institute of Housing’s Housing Review estimated that support for the private market is taking nearly 80% of current investment compared to just over 20% going as support for affordable housing.

At local level, the riches flowing into the pockets of the housebuilders should stiffen the resolve of councils who are fed up with developers pleading that schemes are ‘unviable’ due to modest requirements that a proportion of new homes should be affordable.

In this debate, profits per home of around 20-25% of the cost are taken almost as a given, a fixed cost. I can remember a developer telling me that the rule of thumb in building costs was ‘one-third for land, one-third for construction, and one-third profit’. In our Brexit-dominated world, construction costs are likely to inflate rapidly in the near future. So, if anything is to be done it must be to bear down on the other two elements: land and profit. We have posted a lot recently about land and taxation: another good step would be to tackle the Help to Buy gravy train.
Posted by John Gray at Thursday, September 13, 2018