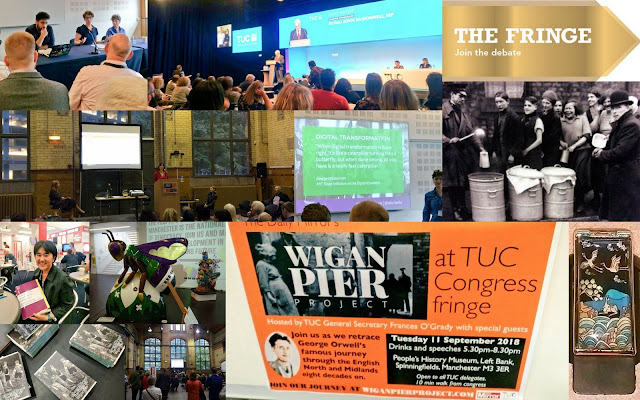 Still catching up on posts about last week's TUC Congress. After a "late night" on the Monday following the UNISON TUC delegation social (and aftermath) I was in Congress for the 9.30am start on the Tuesday but a little slow on "twitter" for some reason.

I was really pleased at Congress for the support for "Show Racism the Red Card’s Wear Red Day, which this year will be on 19 October.

Lunchtime, I went to the "digital transformation for unions" fringe where Chair, Jenny Andrews, of Unions21 made it clear that we have to learn from Darwin survival of the fittest theory and as a movement either "adapt or die" to digital change (I sort of agree but not totally).

Alison Charlton from UNISON digital team spoke about the quote that when digital transformation is done right, it is like a caterpillar turning into a butterfly but when it is done wrong, all you get is a really fast caterpillar.  She also made a really important practical point that don't just ask what people want from digital - but instead ask what is the problem & what do they want to achieve?  Her role as a professional is to provide the digital solution.

Ali Melanie from the NUS said the next big human rights issue will be on our data rights. People are still trying to grapple with the concept of "Ethical digital". He answered my question to the panel on how to deal with all the digital "babble" out there by saying we need to try and compartmentalise the information that unions send out to make it relevant.

When an assistant general secretary from a more "traditional" union (who many years ago I was on an WEA Employment rights course with him) asked how he can digitalise union circulars sent out to members? Ali asked in apparent all seriousness "what is a circular?".

I was interviewed by Dr Jeong-Hee Lee, a researcher from the Korean Labor Institute about collective bargaining in Local Government! We also discussed the UK Labour manifesto on this topic. She interviewed me a few years ago when she was researching her PHD. I was given a lovely gift for taking part in the survey. A traditional Korean image on a USB stick (see bottom right on college).

Shadow Chancellor, John McDonnell MP, received a standing ovation after announcing to Congress on how he will be able to pay for nationalisation & public services. He has found the Tory Government Magic Money Tree in the Cayman Islands. He will dig it up and bring it back to UK to be planted!

In the evening I went to the "People's Museum" for the Daily Mirror fringe on the fantastic "Wigan Pier Project". It tracks where the author George Orwell went in the 1930s when he was researching his famous book "The Road to Wigan Pier". George wrote about the hunger and poverty he found at this time, while the project has followed in his exact footsteps and compare his findings with the dreadful child poverty, homelessness and unemployment in modern day Tory Britain.
Posted by John Gray at Sunday, September 16, 2018