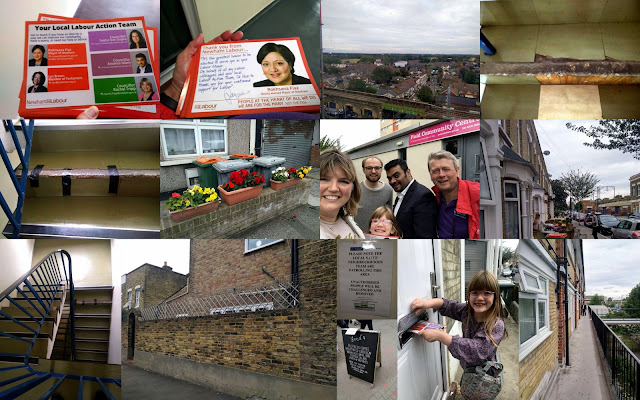 Summer is now over and the never ending cycle of political campaigning and street surgeries continues. I missed a canvass session on Wednesday evening in my home ward but went out with local Councillors Rachel Tripp and Anamul Islam this morning (Sasha is on holiday).

Very positive response, in particular, local residents appreciated the support that their Councillors had given in opposing a recent attempt to close a nearby right of way.

I did not hear any mention of national party issues or Brexit. Mostly when you ask residents whether or not they support Labour they look at you as if almost insulted. "Of course we vote Labour!" (do you think we would vote for the Tories? one resident asked me today)

The Newham Council housing blocks we visited seemed in good order (well done to managing agents Swan Housing) but the L&Q Housing Association blocks had some shoddy bodged disrepair and a definite trip hazard on communal stairs. Cllr Islam will be contacting them with photos.

The picture on the bottom of the college (2nd left) is of a property I canvassed a couple of years ago. A young woman came out to speak to me and her front door slammed shut behind her. No one else had keys and I had to climb the wall into the garden to see if there was a window open. There wasn't so eventually we had to get the lock drilled and smashed the window of the front door for her to get in. I got a new lock fitted and she "sorted things out" with her landlord. Never a dull moment when you are canvassing. Thanks to retired caretaker manager (and Party member) Montrose Matty.

New CLP vice chair for campaigns Karl Lewis ran the board (told us who to contact and recorded information) while the ace campaigner of the day was Rachel's daughter India (Child Labour).

Anam, Karl and I went for coffee at "Freds" afterwards to gossip and chew the fat.
Posted by John Gray at Saturday, September 08, 2018