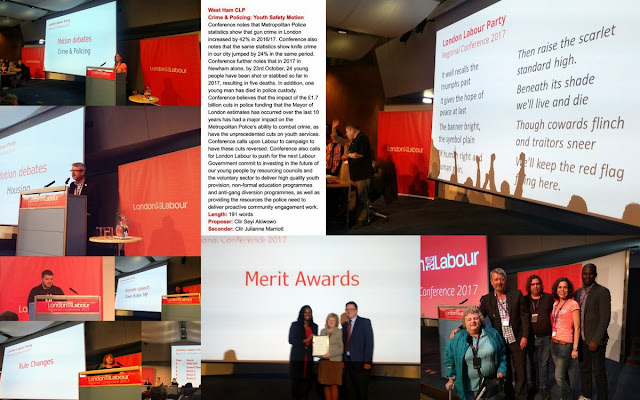 Day 2 of conference started for me with a UNISON delegation meeting at 9.30 which was confusing since we did not know the order of business for the day.  So we agreed to meet up again at lunchtime by which we expected that any controversial matter to be explained so we could make a collective decision.

Then we found out that that the proposed rule changes were to be heard first thing that morning. So it was all rather confusing and messy.

Both UNISON and West Ham CLP had a good day I think with a number of us making speeches in conference debates and contributions during fringes.

Dawn Butler MP closed conference with a lovely personal but powerful political speech about overcoming and rising above racism and sexism.

While the conference was a little grumpy and even bad tempered at times I thought it was on the whole a success and that we were united about the importance of winning both the next General Election and local elections in London 2018.

I was really pleased to end the day with singing (however badly) "The Red Flag" and posing with UNISON comrades for the traditional delegation conference picture.
Posted by John Gray at Sunday, November 26, 2017