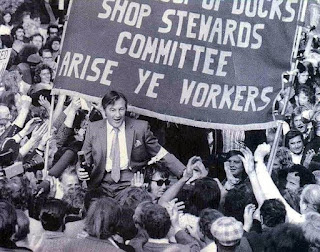 In the blazing hot July of 1972, 5 London dockers were jailed in Pentonville prison. They had picketed in defiance of Tory anti-union laws. This led to a wave of unofficial industrial action and protest involving hundreds of thousands of workers sweeping the country forcing the release of the 5 within a week.
It was a massive working class victory – part of a wave of actions during the early 1970s including factory occupations, work-ins like Upper Clyde Shipbuilders, Briant printers and Fakenham women. A long battle against anti-union laws was underway. There were epic miners strikes in 72 & 74.  In Ireland 72 saw Bloody Sunday in Derry.

This event celebrates this great victory but also looks at the lessons for our battle today against anti-union laws and rampant capitalism. Pentonville stands in the list of historic victories from Tolpuddle onwards.

Join us for this historic celebration and find out about our history and our future.
Posted by John Gray at Tuesday, November 21, 2017