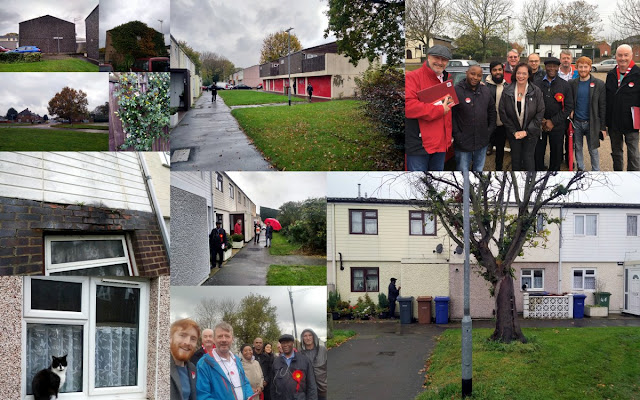 A busy day for West Ham Labour. Started off in Thurrock, Essex in the morning with 2 West Ham canvass teams supporting Labour, one led by Lyn Brown MP and the other by local Candidate, Les Strange (on right of collage photo).

I went out with Les "on the knocker" in a small 1960s Council estate. This part of the ward used to have strong support for UKIP but I was pleased that many residents we spoke to were coming home to Labour. Local issues brought up included damp, disrepair, lack of consultation on road changes and "grass tax" (the local Tory Council tried to charge all Council tenants an extra £5 per week to maintain green spaces purely because of national Tory government curbs on rent).

Overall a positive canvass for Labour, Les had a real gift for talking to people and will make a brilliant Labour Councillor.

After a pub lunch at the Royal Oak is was off back to West Ham for two more events (posts to follow)
Posted by John Gray at Saturday, November 04, 2017