"It’s the 21st century: homes should not be unfit for human habitation" 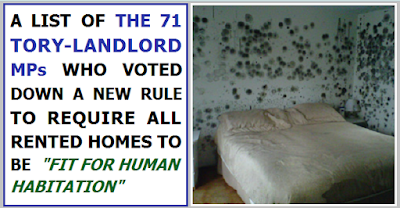 
I get to speak at meetings a fair bit, normally Labour Party or tenant campaign meetings around the place. Recently I’ve taken to asking audiences if it is possible for a landlord to let a home that is ‘unfit for human habitation’. Of course not, they usually say (although some think it was probably a new measure brought in by David Cameron….).
If they were right there would be no need for the Homes (Fitness for Human Habitation and Liability for Housing Standards) Bill which Karen Buck MP has introduced as a private member’s Bill. It is scheduled to have its second reading on 19 January 2018.
Having been involved in one successful private member’s Bill in the past (on standards in houses in multiple occupation, which passed the Commons but was lost when the 1983 general election was called) I know how hard it is to make progress with one unless it is something around which there is a strong consensus and government support (or at least acquiescence).
There have been two recent attempts to ban the letting of homes that are unfit – Tories ‘talked out’ a previous Bill and voted against it when it was brought up as an amendment subsequently. However, the electoral arithmetic has changed since June, the government is beginning to be embarrassed by its reputation for being callous in its treatment of poor people, and the time might be right for them to want to be seen to be doing the right thing.
Crucially, for the Bill to proceed there must be 100 MPs present on 19 January to guarantee a vote. It’s not as easy as it sounds because private member’s Bills are debated on a Friday when most MPs have returned to their constituencies. So: that’s where everyone interested in progressive housing policies comes in. Please make sure your MP is there to vote for the Bill!
Karen is advised by a team of legal experts and the Nearly Legal website has had excellent coverage of the detail of the Bill and its progress. Giles Peaker of Anthony Gold solicitors has written a short briefing on the Bill, setting out why it is important and what it does. I’ve extracted key points below, but the Nearly Legal website will be the best destination for detailed information about the Bill.
Giles is asking that you should contact your MP and to ask them to attend on 19 January. You can find your MP here. He also refers to Shelter’s petition in support of the Bill.
As Giles says:

“I make no apology for going on about this. It is a relatively simple change to the law, but one that could have significant and lasting effects. It is too important to be allowed to be filibustered out. Some one million rented homes in England, social and private, have category 1 HHSRS hazards, amounting to a serious risk to health.”

Please support this important Bill.
Thanks
Steve
Homes (Fitness for Human Habitation and Liability for Housing Standards) Bill promoted by Karen Buck MP
Why is the Bill needed?
Currently, landlords have no obligation to their tenants to put or keep the property in a condition fit for habitation. There is an obligation on the landlord to repair the structure of the property, and keep in repair, heating, gas, water and electricity installations, but that only applies where something is broken or damaged. It does not cover things like fire safety, or inadequate heating, or poor ventilation causing condensation and mould growth.
There are a whole range of ‘fitness’ issues, which seriously affect the well-being and safety of tenants, about which tenants can do nothing at all. For private sector tenants, or housing association tenants, it is possible for the local authority to enforce fitness standards under the Housing Health and Safety Rating System and Housing Act 2004.
However, there is a huge degree of variability in inspection, notices and enforcement rates by councils. About 50% of councils have served none or only one HA 2004 notice in the last year. One London council, which has an active enforcement policy, amounted to 50% of notices served nationally and 70% in London. What this means is that there is a complete postcode lottery on the prospects of councils taking steps – with the real prospect being that the council won’t do so.
For council tenants, the Housing Act 2004/HHSRS standards are all but pointless. Local Housing Authorities cannot enforce against themselves. So council tenants have no way to enforce or seek to have enforced basic fitness standards, including fire safety, if their landlord doesn’t do anything.
Poor standards are a widespread problem. According to the latest English Housing Survey, 16.8% of private tenanted properties have Category 1 HHSRS hazards (which are classed as a serious risk to the occupiers’ health). That is 756,000 households, at least 36% of which contain children, and there are a further 244,000 social tenanted properties which have Category 1 HHSRS hazards. That is a million properties altogether. It is likely that more than 3 million people, including children, live in rented properties that present a serious risk to their health and safety.
What does the Bill do?
The Bill aims to complement local authority enforcement powers, by enabling all tenants to take action on the same issues and standards as local authorities can, and to give council tenants recourse. It follows the recommendations of the Law Commission and the Court of Appeal.
For any tenancy granted for less than 7 years term (including all periodic tenancies), the Bill will add an implied term that
(a) that the dwelling is fit for human habitation at the time of the grant; and,
(b) that the lessor will thereafter keep it fit for human habitation.
If the property is a flat, the obligation extends to all parts of the building in which the landlord has an interest, so it would include the common parts and the outside of a block of flats if all owned by the same landlord.
There are some exceptions, where the problem is caused by the tenant, or where the landlord can’t do anything to fix the problem without breaking the law, or where they can’t do anything without the permission of a superior landlord and that has been refused.
What this would mean is that the tenant could take action against the landlord to make them put right any problems or hazards that make the property unfit and could seek compensation when the landlord hasn’t done so.
It is not a replacement for the council’s own powers, but works alongside them, enabling tenants to take action where the council hasn’t, or can’t. For all new tenancies after the Bill comes into force, it will make it a right to have a home fit for living in".
Posted by John Gray at Monday, November 20, 2017