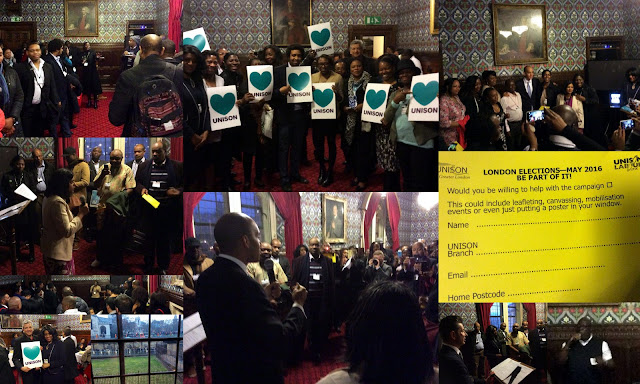 Picture collage is from last month's Parliamentary reception for UNISON Greater London Black Workers. The meeting was on behalf of Labour Mayoral Candidate, Sadiq Khan, was a great success and oversubscribed with a 150 names on the waiting list. Margaret Greer, the Regional Black workers Chair opened the meeting and introduced the keynote speakers

It was sponsored by UNISON London Labour Link (which was why I was there). Sadiq had a clash which meant he could not attend so our regional Political Officer, Steve Terry, read out Sadiq's speech.

First speaker was new MP, Rupa Haq, who described what it was like to be a newbie MP, the lack of black and female MPs in Parliament and the importance of staying in Europe and electing Sadiq as Mayor of London.

Next was Chuka Umunna MP, who asked the room why should they get involved in the political process? Because change will never come about if you do nothing. We all have to be part of working for change. He also stressed the importance of staying in the EU and supporting Sadiq.

Nearly everyone signed the yellow form (middle right) volunteering to help Sadiq in the forthcoming battle for Mayor.