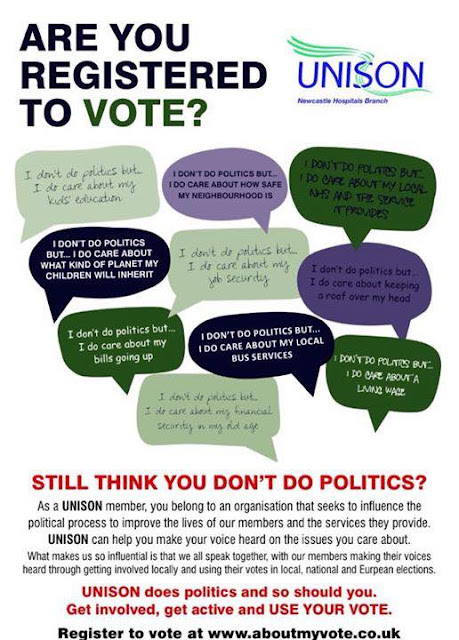 If you haven't registered to vote Click on https://www.gov.uk/register-to-vote. It will take about 5 minutes and all you need is your national insurance number (on a pay or pension slip, tax form, or plastic card).

"THINK YOU DON'T DO POLITICS? IT'S TIME TO THINK AGAIN.

As postal votes for local government elections, will soon be arriving on door mats for areas like Newcastle - remember to use your vote.

Remember how hard our ancestors, both men and women, had to fight and to die for our right to vote.

The Tory Government have hit areas like ours very hard in their ideological drive to destroy local governments, public services and labour strongholds.

Our local councils have seen millions of pounds of funding that should have been targeted for the most vulnerable in our local communities being diverted to richer Tory shires. It's daylight robbery and they're getting away with it.

The Tories are taking 81% of their budget cuts out of the pockets of women, whilst we continue to see largely rich, white men and large corporations being able to avoid and evade paying their taxes.
These are the very taxes that should be going towards funding the excellent public services that are so vital to our local communities.

If you've never voted before - think about what a no vote means.
Certain groups are targeted for worse cuts as the Tory Government know that group doesn't vote - so there's no comeback.

We can take to the streets, march, rally, shout and demonstrate day in and day out and it's right that we do, however, our politics is a numbers game, the party with the most votes gets the most power.

Whilst we cannot change our national government in these local elections, we can give the Tories a bloody nose if enough of us just vote against their divisive and dangerous policies. Policies that make more people vulnerable at a time when they are slashing funding for the most vulnerable.