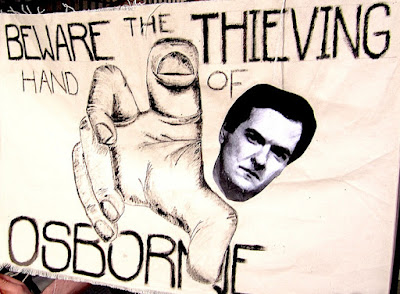 At the same time as Tory Chancellor George Osbourne, is trying to steal jobs from steel workers, benefits from the disabled, tax credits from the working poor and homes owned by Councils, he is also trying to plunder the local government pension scheme (LGPS).

The government is seeking powers to direct Council pension funds to pay into their pet infrastructure investment schemes and even interfere in the day to day running of the £180 billion funds and make them only invest in accordance to the current UK Government's foreign policy.

Ironic for someone who claims to be a small state Conservative and is refusing to nationalise the UK steel works because he believes in "free markets" and that the government shouldn't own anything.

It may be that the local government pension funds should invest more in infrastructure but they should be the ones making that investment decision after receiving proper advice, since they will have to carry the can if it all goes wrong. There is no "Crown Promise" nor even the tender mercies of the Pension Protection Fund for these schemes if they make the wrong investments decisions and go belly up.

British foreign policy is also notorious for recognising and supporting nasty, corrupt, totalitarian regimes but putting aside any ethical issues for the moment, that doesn't mean that these countries are suitable investment choices for council pensions funds to put their members' money into. Such regimes are often economic basket cases and not safe for pensions..

Since there has been no debate in Parliament on this "nationalisation" UNISON is encouraging its members to sign this Parliamentary Petition https://petition.parliament.uk/petitions/125475 (see below) to get a debate in the House on this matter.


5 million people rely on the LGPS to pay their pensions. Government wants powers over LGPS investment funds, but they could gamble away members’ money on infrastructure projects. This is not allowed in any other UK scheme, including the MPs'. The LGPS must be invested in members’ best interests.

Parliament must debate this issue and make the government accountable for these powers of intervention as any such direction may breach the law. Specifically Article 18 paragraph 3 of the EU Directive 41/2003 Institutions for Occupational Retire Provision: “Member States shall not require institutions located in their territory to invest in particular categories of assets.”
Sign this petition
Posted by John Gray at Sunday, April 03, 2016