A Muslim Mayor to Fight Extremism and Make London Safe 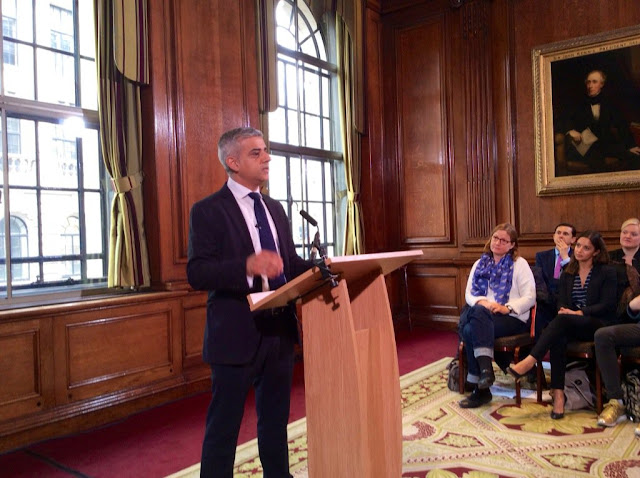 I have been away last week in Wales and now catching up on posts. Picture is from the campaign launch of Labour Candidate for London Mayor, Sadiq Khan MP, that I attended beforehand in Westminster.

Former Home Secretary, Jacqui Smith, spoke first at the launch, about her experiences in Government about tackling extremism and how it is the responsibility of all of us to keep Londoners safe.  She also reminded us that Sadiq and his family had been targeted by extremists because of his moderate views.

In his speech Sadiq made it clear that keeping London safe would be his number one priority if elected and he would be a Muslim Mayor who will tackle extremism.

In the past extremists have attacked him and told his friends and family that he will "Go to hell" because he believes in democracy.  He also received death threats after he voted in favour of same sex marriage and had to consult the Police on protection for his wife and children.

All Londoners face the threat from extremism. He remembers trying to contact his wife and daughters after the bombing on 7\7 to make sure they were safe and reassure them he was okay. British Muslims need to speak loud and clear against the poisonous ideology of a tiny majority.

To take the fight to the extremists, his plan is straight forward. Firstly, make sure that the London has the resources necessary to tackle it and the Police are backed to do what is necessary.

Secondly, act to tackle the underlying conditions that allow extremism and radicalisation to take root.

On both measures I think Sadiq is streets ahead of his Tory rival, Zac Goldsmith. Who is a right wing Tory, who has supported cuts in Community Policing. The Met Police overall has been cut by £600 million and the number PCSOs slashed by more than 70%.  We need the community to trust the local Police and give them intelligence to defeat the terrorists.

On the 2nd point, how can a multi-millionaire Old Etonian, have a clue about the poverty and social segregation that creates terrorism?  The disgraceful "dog whistle" politics of his campaign team and his right wing tabloid allies attempts to try and brand Sadiq and all Muslims as "suspect" is frankly disgraceful.

Sadiq wants to challenge segregation by changing planning laws and to start genuine community programmes that will make a difference. He wants and expects British Muslims to speak out loud and clear against the poisonous ideology of the extremists . Take down their websites. Overhaul the failing "Prevent" programme.

Another difference with the Tory candidate is that Sadiq will campaign to stay in the European Union, not only to protect London businesses and jobs but to keep its vital role in tackling terrorism and keeping London safe.

I will be out in West Ham campaigning for Sadiq tomorrow morning. Meeting in Custom House, 11am, at Corner Shipman Rd and Prince Regents Ln, E16 3DT
Posted by John Gray at Saturday, April 02, 2016