Sadiq Kahn - the boy from a council estate who will fix the Tory housing crisis. 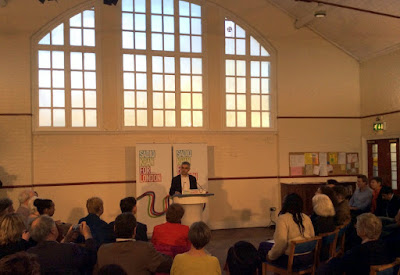 Picture is from the launch this month of Mayoral candidate, Sadiq Khan, policy on Housing for London.

The launch took place in a church hall in Earlsfield, South London. On the way to the launch from the station I walked past the Henry Price Council Estate, where Sadiq was brought up.


Sadiq mentioned the 3 bedroom flat that he was brought up in his speech. Unlike millions of present day Londoners, his home was safe, secure and affordable.

Due to such high house prices and private rents, it is much harder now to save for a deposit to buy a home and impossible for many. His own daughters are unlikely to be able to buy anything local. While it is has been great that his mum lived nearby for his kids, other grandparents in London will be worried that they will not be able to live near to their children.

In London, hospitals and businesses cannot attract staff due to the high housing costs. This election in May for Mayor should also be a referendum on London housing. We cannot allow London to be only for the rich.

He will set up "Homes for Londoners" and build on Transport for London and other public land. Homes built on former NHS sites will have a proportion of homes reserved for health workers.

Sadiq will also set up a "not for profit" letting agency which will end rip off fees and promote longer rental periods and he will name and shame rogue landlords.

There is a stark choice him and Zac Goldsmith. He will build homes at genuine affordable social rent and introduce the London Living rent set at one third of local income. As well as part buy, part rent to get people on the property market.

Zac thinks that the definition of affordable includes so called "starter" homes at £450,000. Shelter says  the average starter home will only be affordable if you earn over £77,000 per year. This shows how out of touch he is at the same time he is still defending cuts to the disabled.


Check out the full details of speech here and his Housing Policy manifesto here at "Redbrick"blog
Posted by John Gray at Sunday, April 17, 2016