Europe: Should we stay or should we go? Sunday Night Live Sunday 28 Feb 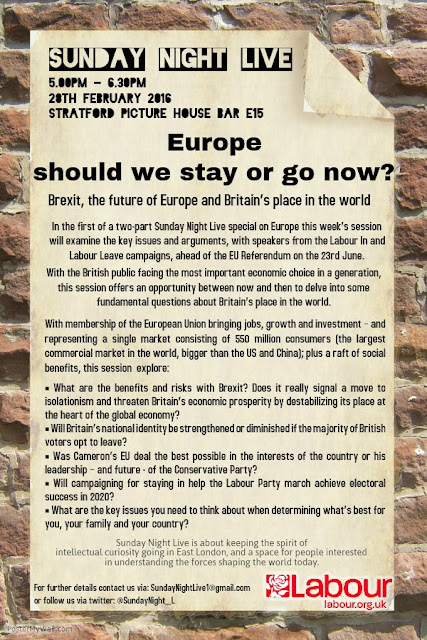 "In the first of a two-part Sunday Night Live special on Europe this week’s session will examine the key issues and arguments, with speakers from the Labour In and Labour Leave campaigns, ahead of the EU Referendum on the 23rd June.

With the British public facing the most important economic choice in a generation, this session offers an opportunity between now and then to delve into some fundamental questions about Britain’s place in the world. With membership of the European Union bringing jobs, growth and investment – and representing a single market consisting of 550 million consumers (the largest commercial market in the world, bigger than the US and China); plus a raft of social benefits, this session will explore:

What are the benefits and risks with Brexit? Does it really signal a move to isolationism and threaten Britain’s economic prosperity by destabilizing its place at the heart of the global economy?
Will Britain’s national identity be strengthened or diminished if the majority of British voters opt to leave?

Was Cameron’s EU deal the best possible in the interests of the country or his leadership – and future - of the Conservative Party?

Will campaigning for staying in help the Labour Party march achieve electoral success in 2020?

What are the key issues you need to think about when determining what’s best for you, your family and your country?"
Posted by John Gray at Thursday, February 25, 2016