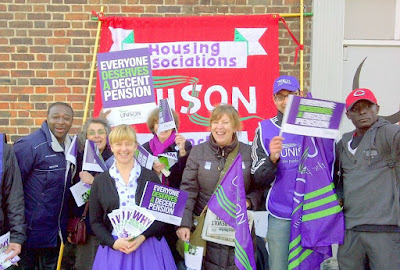 See "Inside Housing" website. "Unions are threatening one of the largest industrial actions in the housing association sector’s history over Circle’s plans to restructure ahead of the rent cut.
Unison, Unite and GMB are close to declaring an industrial dispute over the 50,000-home landlord’s proposals to centralise services, cut jobs, remove subsidiary boards and change terms and conditions of employment.

Circle is aiming to cut its operating costs by 17% a year to enable it to cope with the social housing rent cut, which it estimates will reduce income by £50m a year. The first phase of this will see 60 compulsory redundancies.

The changes begin to kick-in from 1 April, and the unions on Thursday requested an urgent meeting with chief executive Mark Rogers to discuss a ‘counter-offer’ they have made to Circle. Mr Rogers has agreed to meet the unions.

Circle is changing 12 terms and conditions, including alterations to hours, the way salaries are calculated, pensions, leave and redundancy policy. Circle has since modified a number of its proposed policies, extending protection against the changes in areas such as annual leave, pay and pensions. However, unions remain opposed in a number of areas.

The unions are also calling for the restructure to be put on hold until after Circle has completed its merger with Affinity Sutton. They fear that otherwise staff could be affected by a second restructure as the merger takes place. Circle says the restructure is a completely seperate process.

John Gray, secretary of the Greater London Housing Association branch of Unison, said: “We don’t want to have a war over this, but we want to speak to the chief executive as soon as possible and try and sort something out.” The unions were angered by a letter from Mr Rogers last Thursday saying there has been “no firm viable counter proposal from the unions” as the unions’ proposals would cost more.

Robert Melcioiu, GMB convenor for Circle, said he believes around 40% of Circle’s 2,300-workforce are members of the unions.

Mark Rogers, chief executive of Circle Housing, said: “We – alongside the sector as a whole – are implementing a number of changes in order to protect the long-term financial viability of the organisation and continue our social purpose, to invest more in our homes and communities.  We understand that change is difficult for staff, and are committed to supporting them through this period.”


THE DISPUTE EXPLAINED
Circle had already expressed a desire to find efficiencies through a plan called ‘Fast Forward Circle’. However, the 1% rent cut, announced last July, has prompted the organisation to outline an ambitious plan to reduce operate costs by 17% and centralise services. The union argues that the plan will impact on terms and conditions and lead to a poorer service for tenants. It says the plan should be delayed until after the organisation’s merger with Affinity Sutton.
Posted by John Gray at Wednesday, February 24, 2016