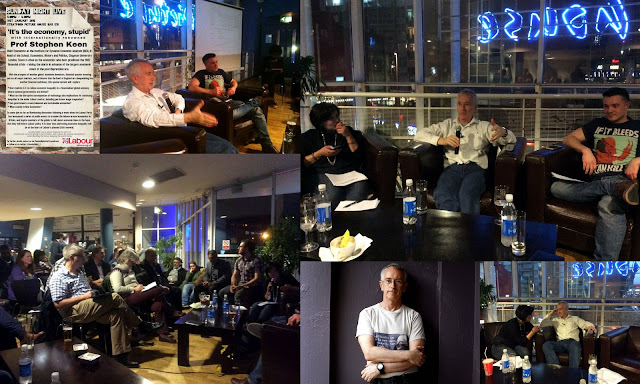 On the last Sunday of January was the 4th (and best attended so far) "Sunday Night Live" at the Stratford Picture House, E15  The idea is to encourage maverick thinking and get subject experts to debate with the public to better understand our world.

The speaker was Economist and Professor, Stephen Keen, who is credited with being one of the very few to have predicted the 2007 financial crisis and resulting recession.

For those of us who have mortgages or property in London and fear we are in a "bubble" he is not reassuring with his analysis of the Japanese economy, where there has been an ongoing 70% fall in property prices since 1990.

He thinks that the disaster in Japan was a dress rehearsal for 2007 as was the Spanish Civil War for World War 2.

Privatisation of public services has proved to be as equally disastrous. The private sector has to deliver profit in the short term. Private utilities will always tend to run down services and not invest in the future.

The City of London makes money by creating debt. By 1990 corporate debt was exhausted,  so they went looking to create a new and bigger market for private household debt. This led directly to the the collapse in 2007.

Stephen argues that those in charge of capitalism don't actually understand it. There is nothing intrinsically wrong with Government debt. Why austerity is so wrong is that if you reduce government spending to reduce this debt while in recession, the private sector loses out.

He argues that the arch Neo-liberal economist,  Milton Freeman, actually talked sense for once when he argued for "helicopter money" (helicopters throwing money out onto the streets to increase demand). Stephen was one of those who made the case for the $1000 dollar payment to all Australian taxpayers in 2008 to combat recession.

No one now in London under 35 can now buy a house unless they have  wealthy parents. Labour needs to take on the Tory government idea that the economy is just like a family household. Yes, government is often inefficient but the only long term plan that offes hope is to re-industrialise the UK. Let us make things again and trade with other countries.

In response to a question about what should we do with Greece, Stephen argued that we should write off the debt to Greece. The people who lied about the Greek economy are now dead or retired and not the young who are suffering. The Greeks will never be able to pay off these debts and their only hope will be to inflate the economy and to encourage it to grow.