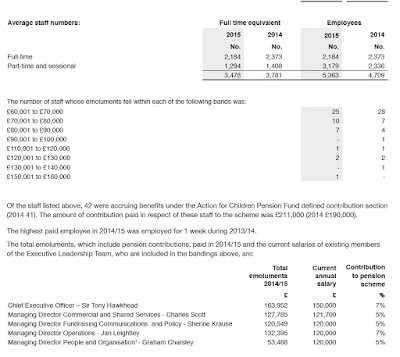 Believe me, for Charity workers to vote this way must mean that they are being treated with complete and utter disdain by their senior management.

Is it right that the CEO of this Charity is paid nearly £164,000 per year when they haven't yet implemented a Living Wage policy for all staff?

The unfairness of senior managers giving themselves pay rises (don't believe the guff about "benchmarking") while cutting the real pay of their junior staff, year in and year out, sticks in the gullet of members, who are passionate for their jobs but simply can't afford to live on the money they get.

It is especially damning when you have a Children's charity whose staff struggle to earn enough to  feed and clothe their own children adquately .

Charities are under pressure not only for having maverick Chief Executives and for unethical fund raising but also for being too often run as a senior management's "mates' club".  When, and if, they trouble themselves to consider their employees, the attitude is, "as long as I'm alright Jack, and sod the little people".
Posted by John Gray at Sunday, February 21, 2016