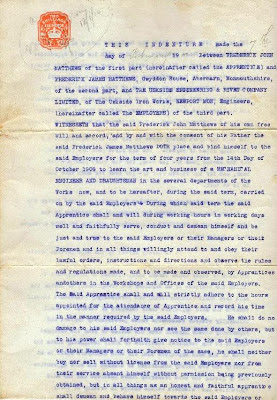 I'm not the greatest fan of the BBC series "Young Apprentice" but it has made me look again at this indenture document (left) signed on "The 7th February 1910" by my Grandfather (or Taid in Welsh, as I called him when I was a young boy) Frederick John Matthews, his father Frederick James Matthews and Uskside Engineering & Rivet Company Ltd, Urkside Iron Works, Newport, Mon (South Wales).

This was a legal document which cost 2 Shillings and six pence in stamp duty. Click to bring up details.

Taid was bound to the Steel works as an apprentice "mechanical engineer and draughtsman" for 4 years  at the age of 16.

He had to undertake to "faithfully serve, conduct and demean himself...an honest and faithful apprentice" He had 14 days holiday per year but his father had to pay the employers £200 for the life of the indenture (£50 every year - a fortune in those days). Offset by wages of 2/- per week for the first year rising to 6/- for the 4th.

If for whatever reason he got into trouble at work there should be an independent panel of "two respectable and competent persons" one chosen by Taid's father and the other by the Steel works. There would be a umpire if they could not agree on what to do.

This concept is of course unrecognisable in modern day employment relations.

The Indenture also has a hand written amendment that he left his apprentice on 2 September 1914 to join the Army. The First World War had started less than a month before. I have posted before on his service in Gallipio and France while with the Royal Naval Division. He won the Military Cross in 1917.  It records that he returned to Usk on demobilisation on 20 January 1919 and finally left on 8 July 1919.

I am still not sure whether he completed his apprentice or not. I suspect not. He was on active service for practically the entire War. His experiences marked him for life, not always for the good.

By coincidence his great grandson Matthew, has recently been selected to be a trainee ROV technician on North Sea Oil and Gas rigs. While his Dad (my brother in law) has not been asked to cough up the modern equivalent of £200, I doubt his employment protection will be in any way as good as that given to my Taid.
Posted by John Gray at Saturday, December 15, 2012