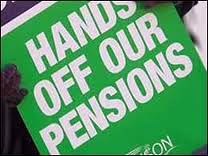 This workshop, is of course, right up my street. Decent defined benefit schemes are being closed down completely unnecessarily and being replaced usually with third rate, inadequate alternatives which will result in employees being dependant on the state when they retire and then dying in poverty.

The first tool they described is a "tape measure". How you measure your pension liabilities? At the moment the tape measure used (the yield in Government loans called gilts) is broken. Due to Quantitative easing and the so called "flight to quality" from the weaker Eurozone countries, gilt yields in the UK are not only historically low but even negative. Pension liabilities may have increased during the last 12 months but nothing has really really changed. It is the broken tape measure.

Trustees should also consider the "Sledgehammer" approach of winding up schemes if closed.

All schemes are different and trustees must refer to the trust rules and make sure they get truly independent advice. If contributions have to go up then time with any pay rises and consider salary sacrifice.

CARE schemes are not only fairer but if risk is the real driver for the employer to close the scheme rather than cost then they will reduce salary risk. Consider risk sharing such as contribution caps.

In the Q&A I asked about the argument that closing schemes did not get rid of the deficit and that they can make things worse. Hilary said that this can be true and that a closed defined benefit scheme can be as inefficient as defined contribution schemes. They become like annuities invested solely in gilts and cash.

Hilary has recently written an excellent booklet for the TUC on "The Future of Defined Benefit Schemes" here.

While the Association of Member Nominated Trustees (AMNT) will be producing their own guide on what to do if your employer tries to close your scheme on December 11 at our AGM.
Posted by John Gray at Sunday, December 02, 2012