A Modest Proposal on Cults, Trots, Socialist Unity, the Great Day and LaLa-ism 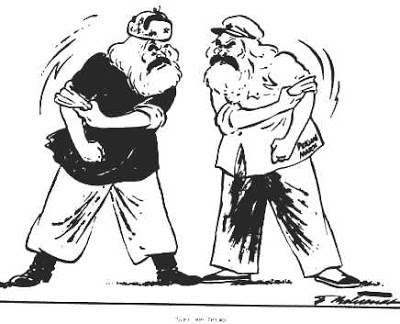 Since this is the season of goodwill to all I checked out the Socialist Unity website to see the latest brother and sisterhood back stabbing, infighting, petty point scoring, abuse and general hatred. I was not disappointed. The reader comments are just amazing.

While the SWP are busy as usual ritually expelling “traitors” in advance of their annual conference, I was surprised at the post by SU editor Andy Newman  “THE “ALLIANCE FOR WORKERS LIBERTY” – THE DYNAMICS OF A MALIGNANT CULT

I must admit to wondering why Andy has picked on the AWL? Who in my perhaps limited contact so far, have not appeared to be as narrow and dogmatic as the other various Heinz 57 Trotskyite/Anarchist sects?  However, I think that this is actually all just a bit of a red herring (no pun intended).

Since surely all of the “ultra left” are by definition going to be in some form of a cult since they all profess to be “revolutionaries”.  If you think the world is so horrible you need revolutionary change, then you are going to have to have some sort of tight discipline and control to try and bring it about?

How on earth can anyone honestly think there any practical likelihood of there being any sort of a revolution in this country?

Now, I want radical change in our society. But all my adult life I have seen articles and posters advertising meetings that proclaim the “great day of the revolution” is just around the corner. What complete and utter rubbish.

The idea that if the unions were just more militant, organised more demos, occupied some phone box and took more strike action, then the masses would come to their senses and storm Buckingham Place is just fantasy and indulgent politics. There was more chance of the Mayan prophesies happening.

Since 2007 there has been an open goal due to the economic crisis and there is not the slightest interest whatsoever in revolutionary class politics.

This is not about the “politics”. I am a fully paid up believer in reformism, parliamentary democracy, rule of law, equality in all aspects, strong trade unions and a genuine mixed economy. Yet I will work with anyone who may completely disagree with me in the long run but will sees the sense in unity to bring about common and achievable immediate goals.

There cannot in my view be any unity with those who think that their primary purpose is to bring about something (the Great Day) that is silly, ridiculous and laughable. Everything they do is driven by this obsession. So we cannot trust them nor their many and competing “Fronts”. We also cannot work with those who will do what they are told by their central committees regardless of what they believe in or were elected to do.

My father believed that communism in this country was inevitable, but he thought it would not happen in his lifetime nor for many generations. In the meanwhile he would support the Labour Party and work with others such as the Communist Party of the time, in the interests of working class people.  While they and others may believe in revolution, they are realistic about the prospects and will not sell out the interests of working people to satisfy nonsensical dogma.

So my New Year 2012 Modest Proposal is - we can have a socialist unity of sorts.  But not with LaLa-ism
Posted by John Gray at Sunday, December 30, 2012