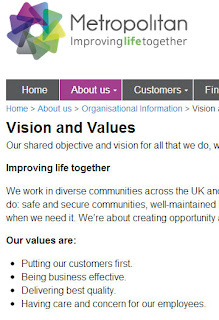 Below is a press release from our branch about tomorrow's protest against poverty pay. As you can see from the screenshot to your left that Metropolitan "Vision and Values" includes "having care and concern for employees".

How they can square these visions and values with paying staff poverty pay and taking on part time workers so they can cheat the taxpayer is beyond me?

"UNISON members in Metropolitan Housing Association (MHA) are planning to hold a mass lunchtime protest outside the organisation’s London headquarters at Cambridge House, in Wood Green on Friday 14th December.

The protest is in response to a lack of progress in current consultation meetings on proposed changes to the terms and conditions of staff members who are employed as Care and Support Workers.

MHA has already begun advertising for Support Workers at the new (low) pay scales. Anecdotal reports from within the organisation suggest attempts to recruit staff on these terms have been costly and inefficient, as posts have to be re-advertised 2 or 3 times.

UNISON Regional Organiser, Colin Inniss, stated: “it seems that Metropolitan Housing Association are determined to tarnish their fine reputation for high quality service delivery by paying a significant number of their dedicated Care and Support staff poverty pay. That is shameful”.

UNISON Housing Associations Branch Secretary, John Gray added: “It appears front line staff are being asked to pay the price for the lack of competent leadership within Metropolitan. Inflicting poverty pay on others while those at the top collect bumper wages reeks of hypocrisy and is unfair”.

3. Brian Johnson, formerly of Moat, has recently been appointed chief executive of Metropolitan.

The London Living Wage is designed to help people towards a minimum acceptable quality of life in our capital. It is calculated by the Greater London Authority and is currently £8.55.
Posted by John Gray at Thursday, December 13, 2012