Wrecker of the Week 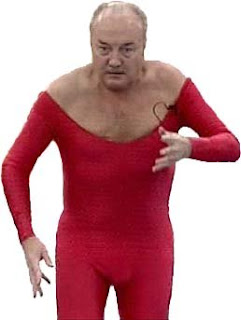 I've decided to start a new regular blog feature called "Wrecker of the Week".  This will be awarded to individuals and organisations who have done their best to wreck and split the Labour movement instead of uniting us to oppose our natural enemies, the ConDem Coalition.

Obviously the most recent winner would have been SPEW (Socialist Party of England and Wales) for organising rallies to undermind official TUC events and then trying to shout down speakers.

However this week's prize goes to its democratic centralist rival, the SWP, for this superb bit of pointless and completely childish sectarianism by one of its full time paid bosses.  (Please note that I waited until the UAF march was over before posting this).  This email was sent by trade unionists in Newcastle.

"Open Letter to UAF re: Northern March Against Racism 2010

To the leadership and members of UAF (Unite Against Fascism):

We are writing from the organising group of the Northern March Against Racism 2010, which is due to take place in Newcastle upon Tyne on 20 November. The march has been called by TCAR (Tyneside Community Action Against Racism), and is supported by over a dozen other organisations and trade union branches. We are writing concerning attempts by a leading UAF member and SWP regional organiser, Yunus Bakhsh, to undermine the Northern March.

On Monday 18 October, TCAR supporters put posters in the following shops in the Arthurs Hill area of Newcastle to publicise the Northern March:

By Wednesday 20 October, most of these had been removed and in their place were UAF posters advertising the march in London on 6 November. We then put up more posters for the Northern March in the same shops on 20 October, of course leaving the UAF posters in place. The Northern March posters remained until the morning of Tuesday 26 October, when someone again removed the posters from shops including:

On enquiring with shopkeepers, several were able to confirm that a man had entered the shop, removed the posters for the Northern March, and in some cases replaced them with a poster for the UAF march. These shopkeepers confirmed from a photograph that the individual who removed the posters was Yunus Bakhsh. We have access to a shopkeeper’s CCTV footage, which clearly shows Yunus entering the shop at 14:48:26 on 26 October, removing the poster for the Northern March Against Racism, before going to the counter and handing the shopkeeper a flier for the 6 November UAF march.

We are sure you will agree that this is an appalling and unacceptable act of sectarianism, which damages the integrity of the wider anti-racist movement in the region. How can any serious socialist justify this sort of behaviour? We urge you to take measures to ensure the members involved end such acts of sabotage immediately.

The Northern March Against Racism is a vital part of building positive anti-racist unity in the region. It is being organised on an open and democratic basis. The local branch of UAF were first invited to participate in building the Northern March on 14 July, including full rights to distribute their literature, display banners and have a speaker. This offer has so far been ignored, but remains open. We hope that you will take immediate action to end the removal of our posters by your members, and that UAF will start to make a positive contribution to the Northern March. We await your response, and wish you well in London on the 6 November.
Fraternally, Organising Group; Northern March Against Racism 2010"
Posted by John Gray at Saturday, November 06, 2010

I hope you will count Phil Woolas as a wrecker?
Very damaging at a time when an alternative to the ConDems is needed.

No, he has been found by a court to have committed a criminal Act(pending any appeal)which is quite different.

I don't think that this judgement will divide anyone (nor surprise)

ian so you think this sort of behaviour by a swp official is ok?

Im talking about Woolas. Not the SWP. I know the SWP are idiots. They come from the same stock as some of our ex student New Labour types.
Just humour them.

Woolas is a divisive character.He will turn Labour voters away in the seat he used to represent because of his actions.He was a liability before this happened (as you often say, my opinion of course!!)

Harriet has the right idea

"The deputy leader Harriet Harman said it was "no part of Labour's politics to try to win elections by telling lies" and the party would not support any appeal."

I expect rubbish from the SWP. They have form. But not from Labour

We want to see that footage of Yunus 'never knowingly not-outraged' Bakhsh! Any chance of getting it on youtube?

Apparently Woolas got into politics through the ANL.

ANL youth? - no wonder he went off the rails. Wombats.