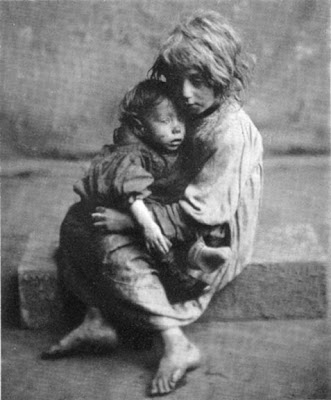 In an east London state nursery, staff noticed that a three year old new starter, a little girl, was still wearing nappies.  They were concerned and when the mother came to pick the toddler up, they spoke to the Mum.

Her mother was a single parent who was originally from East Europe.  She explained that the only accommodation she could afford was a small room in a large house full of strangers.  The one toilet in this house had no door on it.  The toddler refused to use this toilet since there was no privacy.  Therefore she still wore nappies.

Extreme poverty and deprivation still occurs in this country.  Not the same scale as in the times of Dickens but still here - and now.  Coalition cuts in building and refurbishing homes, housing benefit, protection against eviction, regulations of HMO's, massive increase in rents and the farming of homeless to the private sector will make things far, far worse.

There was redemption for this family as nursery staff rallied around to rescue Mother and daughter, from the slum and help find them a self contained flat to live.  Well done to them. No Tory "Big Society" saved them but rather experienced and trained public sector professionals - thinking out of the box.

It goes without saying that you could hope against hope that a Christmas spirit would mean that Cameron, Clegg, Shapps and Boris (four guilty men) will change their ways to prevent the "shadows of what may be."

Which always reminds me of the saying "you've got two hopes, Bob Hope and no hope" of this.

John I will do somthing rare I will defend the privous Labour Government as without the exsistance of sure start this would most likly not been picked up for anouther 2 years.

this is something Andrew that you will have to get use to in future months and years.

John - excellent outcome for the Mother and Child, but they weren't living where they were because of coalition policies. Things might be getting a lot worse, but it hasn't been a bed of Roses for many under Labour. It is also a Labour Administration in Newham that are bringing in swingeing cuts whilst borrowing millions to bail out WHU.

The story you relate is just as likely to happen in Newham for so many reasons, and many of them have nothing to do with the Coalition Government.

Hi Bob
You are right that this could happen in Newham and that it wasn't a bed of roses under Labour but I would argue things are always worse in Tory councils (and governments) - who don't tend to give a damn about poverty or deprivation.

Things have and will get much, much worse – never forget this is thanks to the Bankers crisis and unnecessary Coalition ideological cuts.

People don't realise how horrible things will be.