Service of Thanksgiving at West Ham Church for Queen Elizabeth 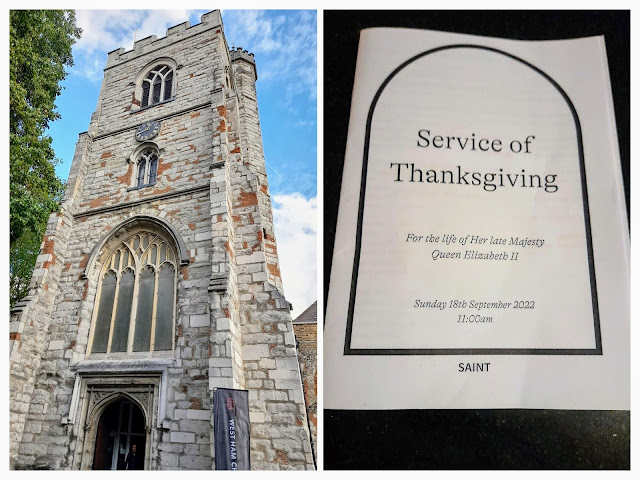 This morning I went to a "Service of Thanksgiving" for the late Queen at  the historic, All Saints Church, in the ward I represent as an elected Councillor, West Ham, in Newham London. I was with the representative for the West Ham Parliamentary Constituency, Lyn Brown MP and the Mayor of Newham, Rokhsana Fiaz OBE.

It was a wonderful service. A mixture of tradition possessions, hymns and prayers alongside more modern music performances.  During which Mayor Fiaz gave a Tribute and Lyn Brown MP, a Reading. It was in all a fitting way to honour the late Queen, who was very much a traditionalist but also kept up with the times.

At the end of the service, for the first time, I sung "God Save the King", which did seem very strange at first but by the end it seemed more natural. The sight of young children from the church creche jumping up and down and dancing with excitement during the national anthem brought a smile to my face. I am sure that King Charles III would not mind.

Afterwards I signed the book of condolences and thanked the Queen for her long public service. While I have explained previously my personal belief in constitutional reform, I  have nothing but respect for Queen Elizabeth. A dedicated, tireless public servant, who has served this nation in peace and war, for the past 96 years.