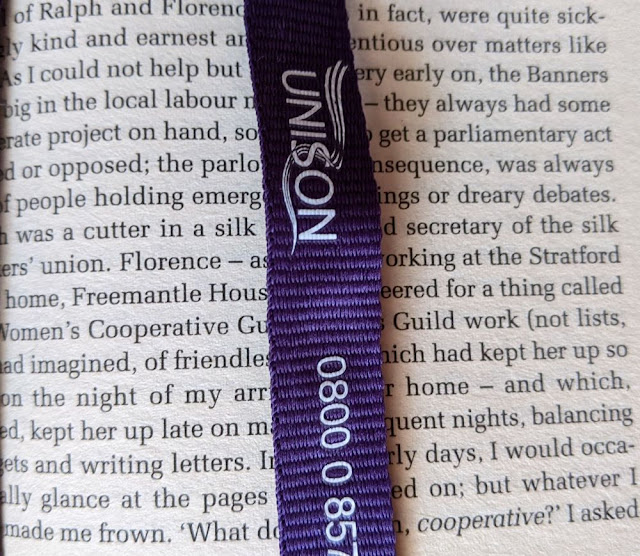 Hat tip UNISON Learning & @LondonNurse "A few weeks ago one of our UNISON learning reps asked us if there was a ‘reading list’ of recommended books with a trade union angle. Well, there wasn’t… so we asked on social media, and UNISON members, activists, staff, and allies all gave us brilliant suggestions. So here they are.

As with any reading list, some of these books will resonate with you, while with others you’ll wonder how they ended up on the list in the first place. They’ll all reflect, in one way or another, the time and the place in which they were written, and many of them inevitably deal with themes of hardship and struggle and include distressing scenes. But each of these books has had something to say to a fellow trade unionist about work, about the fight for justice, or about the world in which we live and organise.

At the very top of the list was Robert Tressell’s The Ragged Trousered Philanthropists. A couple of people suggested The Jungle by Upton Sinclair. And John Steinbeck was also named several times. UNISON learning workforce development organiser Kirsi Kekki was one of several people to recommend The Grapes of Wrath, and In Dubious Battle was also mentioned.

From the nineteenth century, Elizabeth Gaskell’s Mary Barton and North and South both have a lot to say about labour relations, while Charles Kingsley’s Alton Locke is set during the Chartist campaign. Lynn Ferguson recommended Germinal by Emile Zola.

Moving into the twentieth century, Jack London with a popular choice, with members suggesting The Iron Heel and People of the Abyss. The Citadel by A. J. Cronin and We Live by Lewis Jones are both set in Welsh mining communities and first published in the 1930s. From the same period is Lewis Grassic Gibson’s trilogy A Scots Quair, of which the second two books deal with the 1926 General Strike and the Great Depression. Later in the twentieth century there’s Alan Sillitoe’s Saturday Night and Sunday Morning. And one commenter said, ‘Gil Scott-Heron’s “The N… Factory” is a masterclass in political dilemmas and difficult political decisions in the face of crushing oppression.’

Some historical novels have a trade union angle, too. Strumpet City by James Plunkett is set during the Dublin lockout of 1913, while Sarah Waters’ Tipping The Velvet moves through various milieux of turn-of-the-century London including the organising world and the campaign for the vote.

There were plenty of non-fiction recommendations, too. Lynn Ferguson said, “When I was teaching a UNISON Return to Learn course around 20 years ago I gave one of my students Huw Beynon’s Working for Ford as part of the research project module.”

This Is An Uprising by Max and Paul Engler

Life As We Have Known It: By Co-Operative Working Women, ed. Margaret Llewelyn Davies

The Making of the English Working Class by E.P. Thompson

Homage to Catalonia by George Orwell

100 Years of Labor in the USA by Daniel Guerin

The History of the Working Class by G.D.H. Cole

The History of Ruskin College by Harold Pollins

And one commenter suggested: Go on http://tuc.org.uk/publications and use the filter in the left hand side for non-fiction.

Don’t forget poetry! We also had a recommendation for ‘Anything by the Newcastle Poetry Collective on the perils of work’

Happy reading! Let us know how you get on – and, if you have anything else to add to this reading list, you can get in touch with us by emailing learningandorganising@unison.co.uk".