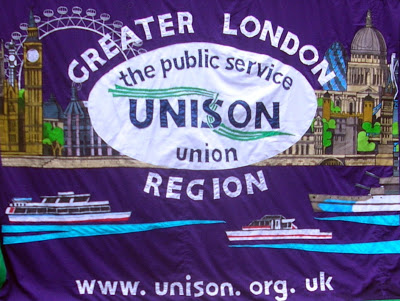 On Tuesday 2 November there will be a virtual meeting of the UNISON London Regional Council. All branches can send delegates to this meeting.

NOT IN OUR NAME

We note with extreme concern the actions taken by the NEC at their meeting of the 6th October 2021 to vote to amend UNISON rules in breach of Rule N1 which states “Rules shall not be amended except by a resolution passed at a National Delegate Conference by two thirds majority of those delegates voting in favour or in the case of a card vote, at least two-thirds of the votes cast.”

Therefore exceeding their authority and breaching UNISON rules. Furthermore the NEC has no mandate to make these decisions which potentially puts UNISON in legal jeopardy.

The actions of the NEC in voting for rule changes and thereby bypassing the sole power invested in National Delegate Conference to change rules as set out in Rule N1 brings our union into disrepute and likely to discourage our membership.

One of the aims of UNISON as set out in Rule B2.5 “To promote and safeguard the rights of members to have an adequate opportunity to participate in the initiation and development of policy making, through meetings, conferences,, delegations and ballots, and to encourage the maximum democratic debate, together with the right to campaign to change policy, while at all times acting within the rules and agreed policy.”

The actions of the NEC to try and amend rules without any consultation with the wider union also seems to breach this rule as well, at least in spirit.

Celebrating their majority in the NEC, “Time for Real Change” candidates stated #TimeForRealChange has a collective vision for change. UNISON members are at the heart of that vision. We are determined to make ‘member-led’ more than just a turn of phrase in UNISON.”

Obviously “member-led” and “members are at the heart of that vision” does not involve consulting any of the Devolved Nations, Regions, Branches or members about any changes. the NEC propose.

We ask Regional Council to agree the following:

1.To register the disgust of the Greater London Regional Council about the misuse of power by the newly elected NEC members and the flagrant breaching of UNISON rules by trying to amend UNISON Rules and bypassing National Delegate Conference.

2.To request the roll call of NEC members who attended the meeting and how they voted at the meeting.

3 To call upon Greater London UNISON branches to pass motions to request that the General Secretary call a Special Delegate Conference in line with UNISON rule D 1.2.2
(D 1.2.2 A Special Delegate Conference shall be convened on receipt by the General
Secretary, within any two-month period, of requisitions to that effect, stating the business to
be transacted, from branches representing not less than 25% of the Union’s membership)

To debate the breach of rules and to insist that in future the NEC apply the rules of the union in the correct and proper manner and take account of any legal advice they receive from UNISON’s in-house legal team".

Email ThisBlogThis!Share to TwitterShare to FacebookShare to Pinterest
Labels: Coup, Greater London Region, Junta, Not in our Name, TRFC, UNISON