"On the knocker" in Canning Town South 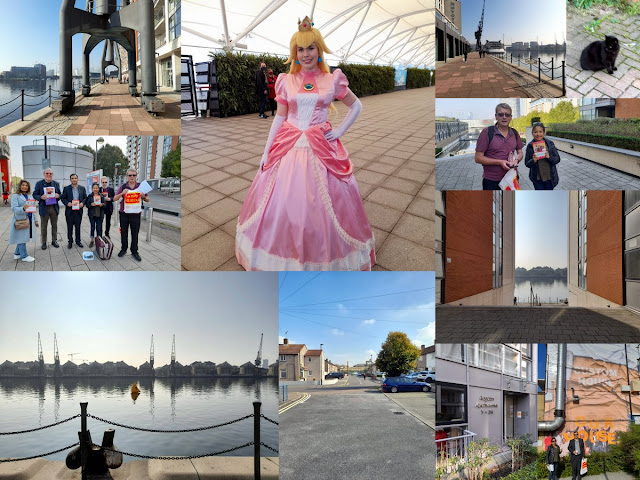 It was a lovely day for the time of year to go canvassing for Labour. We split into two teams. My team leafleted some modern apartment blocks overlooking the old docks (we could not get in to door knock).

Then by contrast we walked through the Excel Centre and across the Docklands Light Railway to door knock in the more traditional Canning Town. On route we met a "visitor" (Pink Princess) to the Gaming Exhibition being held in the Excel Centre this weekend. Anyone know which character she was representing? I did ask and think she said "GK" game but have no idea what this is?

Probably because it was a warm and a Saturday, residents were on the whole, pleased to see us and happy to chat. Local Councillor, Belgica Guaña, picked up a fair bit of case work.

The response was overwhelmingly pro Labour (we had 55 contacts on "Labour Doorstep").

I had a number of interesting conversation with residents but with one in particular (who had been previously identified as being "Against" Labour but said he usually voted for us) who explained that he had felt forced to exercise his right to buy his former Council home, because he was worried that his grown up children would be evicted from his home upon his death, since they would have no right to succeed to his council tenancy.

I did explain that this was not necessary so but said I did understand his concerns. I think perhaps we ought to think about explaining to Council tenants about succession and assignment rights, which may mean tenants will not feel forced to buy? He agreed with me that "Right to Buy" is a bad idea if Councils are not fully compensated for its loss and it is one big reason why his children cannot get a Council home of their own.

Afterwards we had breakfast in a café in Freemasons Road, then made our way to St John's Church in Stratford (me by bike) for training on the Labour Party Campaigning Software called "Contact Creator".  Which I thought went really well and I learnt a lot. The app is far better than the last time I used it.

Afterwards, a beer or two at the King Eddies. Overall, it was a rather long but perfect Labour movement day.