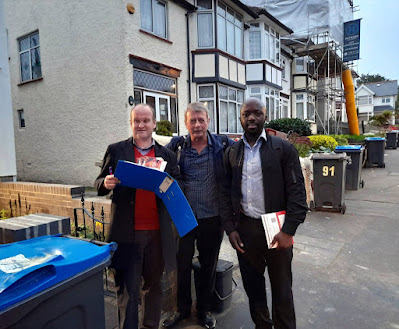 Just back from an evening campaigning with Labour colleagues in Croydon on their Mayoral Referendum.

Voters are being given a choice of staying with the traditional Council Leader and Cabinet Model or an Executive Mayor system.

While I strongly prefer the Committee model (not on the ballot paper). I was pleased to support Labour colleagues in Croydon, who are opposed to the Mayoral model which is being driven locally by opportunist Tories.

The count is taken place now and a result expected soon. It is going to be really difficult contest for Labour following the financial difficulties the Council is in at the moment.

Also, some proponents of the Mayoral System are claiming (wrongly) that a Executive Mayor can veto planning applications. Which is a sensitive political issue in the suburbs.

We had a very good reception but many people were unaware of the election and found it very confusing. I suspect the turnout will be very small. Which is a pity.

I went with Joseph my UNISON branch secretary (and Labour Link activist) and we firstly went out with Martin Whelton, Cabinet lead for Housing in Merton Council. Later local Councillors and members from Stratham (hello Louie) and Tower Hamlets (hello Cllr David Edgar) joined us.

It was good to be out campaigning with Labour colleagues out of your local comfort zone.

But note to myself - Remember to bring a torch if you go out door knocking in dark evenings!

UPDATE: Alas, the Mayoral model won https://www.bbc.co.uk/news/uk-england-london-58840176. Hope in 10 years time (earliest that the matter can be rerun) there will be a Committee model choice.