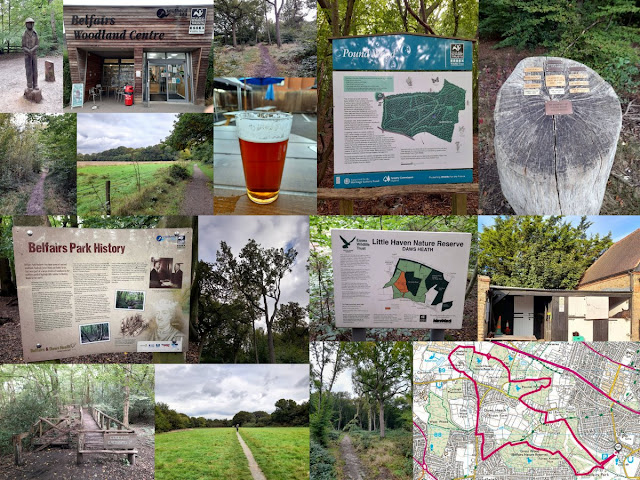 Yesterday Gill and went on this walk around Daws Health,  detailed in "Wild Essex Walks" book. It was a largely interesting 6 mile walk thorough ancient forests, but not that "Wild". It was a little busy in parts and there was road noise from the A127 for much of the route.  Also since nearly all of the path was through woods, there was no great scenic views.

A former local landowner, Henry of Essex, had apparently dropped the Royal Standard when he was ambushed by Welsh rebels in 1163. His land was confiscated as a traitor for doing so and he lost a "Trail by Combat" challenge over this. Monks carried him off after he was knocked unconscious in the fight and afterwards he became a monk for the rest of his days. I have no idea whether this was a "fair" outcome or not.  Perhaps after last nights modern day "Trail by Combat", Deontay Wilder, should consider himself lucky!

The Woodland centre was worth visiting at the end. We had lunch next to the "Codgers Crossing 2" (the second wooden bridge built by retired volunteers in 2011) and a pint at the end in Spoons at Leigh on Sea.