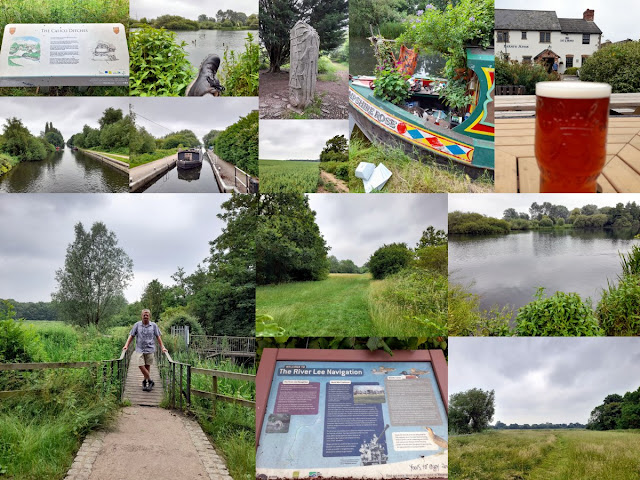 Somewhat off message but today Gill and I drove to this 4.5 mile circular route from "Essex Walks" Pathfinder series. It is also very accessible by public transport.

It was a peaceful and relaxing walk mostly next to water but also across fields and hedgerows. The weather forecast was a bit dodgy but luckily there was only a few spots of very light rain.

It is difficult to imagine that this area was for hundreds of years a Royal factory for the production of gunpowder and armaments. There still remains a very large fenced off former military "research station" which appears to be gradually being knocked down to build modern flats and offices.

Many of the lakes and water features were also caused by industrial scale gravel extraction.

The riverboat community were very friendly (apart from one who told us off for cooing at her cat which was sleeping in the bow of the boat).

There are a number of interesting modern sculptures scattered around the area which are well worth a stop and a ponder and at least one wildlife hide.

There was a "Viking" signpost and information board which pointed out that this used to be the border between the Anglo-Saxon kingdoms to the west and the Viking controlled territories known as Danelaw to the east.

By coincidence last night, I started watching the "Last Kingdom" series on Netflix, which is set in this period. It is not for the fainthearted (thank you Shabs) and I will give it another go tonight but if the death and gore count is similar to last night, I may give the rest of the series a miss.

I recommend this walk but it is likely to be very busy for the first half if a warm and sunny weekend.