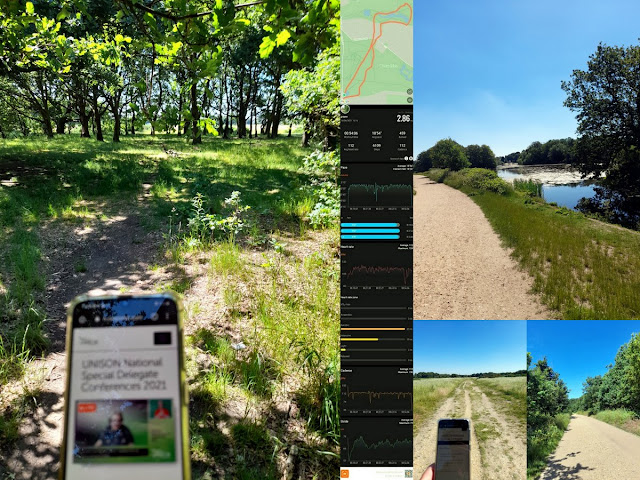 Day 2 NEC pre meeting started at 8.30 but it was not as jolly as yesterday, in fact a little fractious and there were some frank exchange of views (me included).
Christina gave her first conference speech as General Secretary. She was confident, articulate and just likeable. She shared personal stories about her beliefs and life experiences with robust and telling punches on all the government failures. I am so proud we have her as our leader. Next, conference continued to debate motions.
The technology seemed in little smoother today but I was kept being kicked out by the system and had to log back in but soon got the hang of it.
This is for all the obvious reasons definitely the most different UNISON conference I have ever attended in my 27 odd (some very) years as a member.  After Christina's speech I went outside to get some fresh air and steps/heart points in the local park before it became too hot (temperature locally peaked at 29C today I believe).
I was able to listen and view the conference on my smart phone (wearing headphones) rather than at home on my laptop. I knew that there was no danger of being called to speak on the motion I had been asked to make on behalf of the NEC.  In the unlikely event that I was asked by the platform to speak on an item with short notice I could have done so from the park.
It was actually a nice and relaxing way to enjoy conference (but I would far rather be in a physical than a virtual conference).  Will future UNISON conferences allow delegates to join from Brighton or Bournemouth  beach? I think not but who knows?
There was a number of interesting and well argued debates but little or no opposing views which I think is a pity.  There are 1.3 million members in UNISON who have a wide range of views and opinions and some constructive opposition to motions in such a democratic union would be good.
Tomorrow is the last day and the weather forecast so far certainly doesn't looks promising for a morning walk...
Posted by John Gray at Wednesday, June 16, 2021