Rereading Patrick O'Brian "Master and Commander" (and the rest) 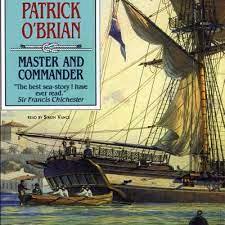 Off message but recently I have started re-reading the Patrick O'Brian, historical novels about fictional 19th century Royal Navy sailors Aubrey & Maturin. I have finished the first novel (out of 20 and there is a unfinished 21st) and are now enjoying the 2nd, "Post Captain".
As someone who enjoys messing about on a river but has been known to get sea sick on a modern cruise ship, I do not know why these novels appeal to me so much (reread every decade or so). There was a "John Gray" who served on the HMS Victory during the 1805 Battle of Trafalgar, but he is not a known relative.
People may have seen the 2003 film "Master and Commander" staring Russell Crowe, which was based on the novels and which I did enjoy.
In the historic naval museum in Portsmouth dockyard they have as an exhibit, what is thought to be an actual surviving sail from HMS Victory and the battle in 1805, which appears to be clearly torn in part by enemy cannon balls. In past visits to this museum to see this sail, they used to play in a light show, very loudly some of the battle scene music used in the film "Master and Commander". It givens you a sense of the terrible noise, confusion, fear and carnage of the actual battle.
Don't read the novels for the history and humour without an understanding of how awful the real life battles must have been.
Posted by John Gray at Friday, June 04, 2021