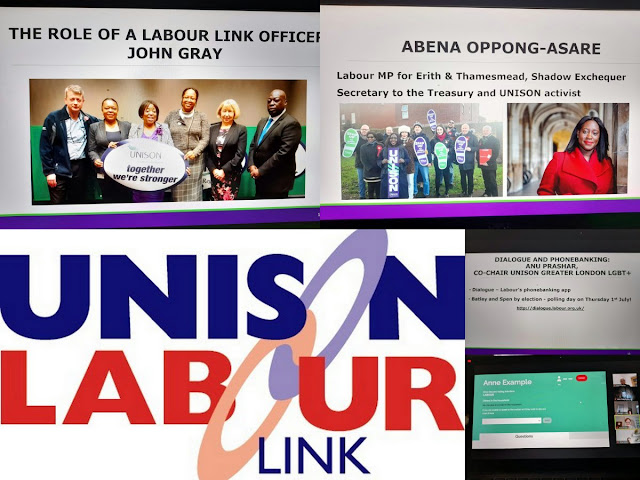 The meeting was Chaired by Yvonne Green and our guest speaker was Labour MP for Erith & Thamesmead, Shadow Exchequer Secretary to the Treasury, Abena Oppong-Asare (a long time UNISON Labour Link activist). Abena gave a marvellous talk and Q&A about how tough it is to get on in local and national politics as a Black women but how the support of her political sisters (and others) helped her get through.

Next we we had brief introduction on "What is UNISON Labour Link" by our local organiser, Jack Phipps, followed by a presentation by me on "The Role of the Labour Link Officer" (which I hope people found useful).

We then split into workshops and later reported back on how Labour Link can help branches with campaigns, how to increase engagement and persuade more members to join and participate in Labour Link.

The final session was a training by UNISON Labour Link activist, Anu Prashar, on Dialogue, the Labour Party telecanvass software and in particular how to support our Labour candidate Kim Leadbeater in the by election in Batley and Spen.

I thought the training went well and this will be the first of many.