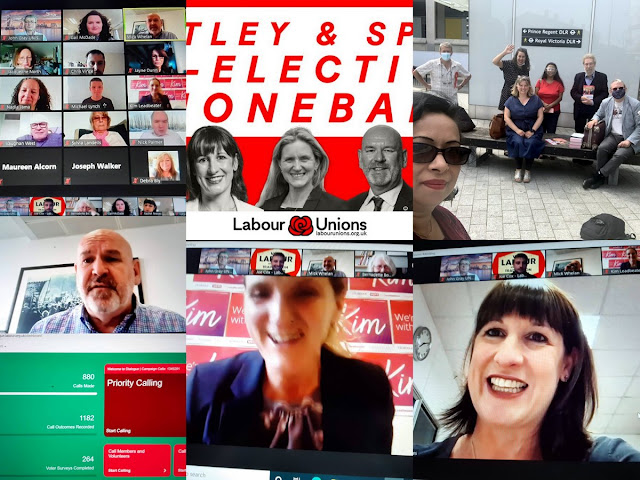 My political campaigning life is beginning to somewhat come back to "normal" (whatever that means nowadays).

On Wednesday evening I took part in a Labour Unions telecanvassing session for Kim Leadbeater, the Labour candidate in the by election next week being held in Batley & Spen. This was hosted with Mick Whelan from ASLEF and Rachel Reeves MP. Kim herself, also joined and gave a barnstorming speech about her politics, her support of trade unions and what she wants to do for the people of Batley & Spen if elected.

The dialogue telephone session itself was quite frustrating since in about 45 minutes I rang 73 electors in Batley & Spen but only managed to complete 5 voter surveys. Nearly everyone had an answerphone on.

The voters I managed to speak to were very positive, including 2 who had been marked down as "Against" the Labour Party on our records but told me how Kim had won them over.

This morning we were due to have a Labour Group physical door knocking session in Custom House, Newham. However, when we arrived at the meeting point, it turned out that part of the Labour Party website was down and we could not download the names and addresses to call at on our smartphones. Lesson learnt is that while new technology is fantastic when it works, you should have a hard copy backup system.

While some of the canvass teams were coming back later that day with paper lists, I cycled back home and joined the Newham Labour Group online telecanvass session (dialogue software which worked for me) targeting our Little Ilford ward.

In a similar 45 minute time frame I "only" managed to make 26 calls but completed 13 surveys. There was far less telephone answer machines and I managed to speak to more people and had some pretty decent discussions. Possibly people are more relaxed and ready to chat on a Saturday morning.

On Monday evening I am chairing a Greater London UNISON training for our "Labour Link" branch officers. At the end of the meeting we are planning to do another telecanvass session to support Kim.