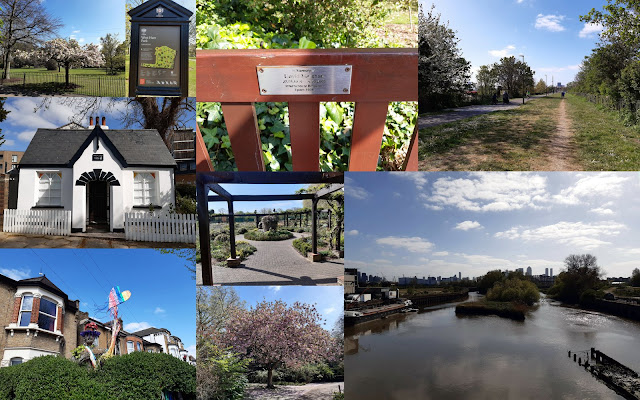 For our daily exercise Gill and I walked from Forest Gate to West Ham Park via the lovely art works in Earlham Grove (bottom left of collage). The park today was looking magnificent in the spring sunshine and "safe" following the closure on Easter Friday and Saturday by the Police because too many people were in the park to enable safe self isolation. The sudden spring chill had reduced the temperature by a half compared to Friday - so no sunbathing or picnics.

I was really pleased to seek out and find in the West Ham Park rose garden, the bench which has the memorial to the Spanish Civil War  International Brigade soldier and poet, David Marshall. It needs some repair and attention which I will look into.

On route to the Greenway, we stumbled across the Willow Lodge 1836, which is right opposite Plaistow station. Apparently the lodge of a former long lost manor house. Must find out more about this Grade 2 listed building.

The Greenway (the former Northern outfall Sewer) is a wonderful green asset. "In 1931 Gandhi visited London for a period of 3 months for talks on the future of India, he based himself at Kingsley Hall in Bromley-by-Bow. His host there, the Christian Socialist Muriel Lester described[17] his long early morning walks, beginning before sunrise, and which often took in the Sewerbank through Stratford to Plaistow. Gandhi enjoyed the elevated view the bank offered, and on these walks he would always gather a collection of well-wishers eager to speak to him".
Posted by John Gray at Monday, April 13, 2020